Yeka Aponte investigates how behaviors are regulated and the implications for pain relief. 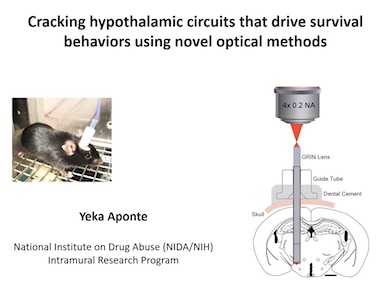 Pain and gain: the brain's response

Studies of neural behavior using microendoscopy techniques are enhancing the understanding of how the brains of mice respond to both appetite and pain.

Presenting in the SPIE Photonics West Digital Forum, Yeka Aponte from the National Institutes of Health and Johns Hopkins University discussed how this could ultimately point towards novel pain relief treatments for humans.

"We are studying the mechanisms by which brain circuits regulate natural or survival behavior," said Aponte. "This is relevant to two current global epidemics: obesity, and the crisis of opioid overdoses."

Determining the roles that neuronal circuits play in driving the rewarding and addictive nature of food intake will help tackle the first crisis, while an understanding of how neurons participate in pain perception - or nociception - offers potential routes to pain relief that avoid the addictive nature of opioids.

"The hypothalamus has been known for decades to be involved in regulating survival behaviors - feeding, sleeping, mating, you name it," commented Aponte. "Our lab is committed to understanding how specific cell types and neuronal circuits in the hypothalamus give rise to those essential behaviors. But it also happens to be one of the deepest structures in the brain of both humans and mouse models to study."

Two distinct cell types in the lateral hypothalamus (LH) have been the focus of this research, referred to as leptin receptor (LEPR) neurons and parvalbumin positive (PV) neurons.

The LEPR-expressing neurons are known to be involved in encoding appetitive and consummatory behaviors, but understanding exactly what happens required the development of tools to image the LH deep within the brain.

"In collaboration with Doric Lenses, we developed a platform in which different gradient-index (GRIN) lenses could be positioned in the brain, and then two-photon fluorescence endomicroscopy with genetically encoded calcium indicators could be used to image those deep brain regions that drive feeding-reward behaviors," said Aponte.

This in vivo volumetric endomicroscopy allowed the population dynamics of different neurons to be assessed in different metabolic states, along with synapse activity. It also allowed characterization of different commercial GRIN lenses for this kind of biomedical imaging application.

"We used a miniscope attached to the brains of freely moving mice to determine the neuronal response to both normal feeding, and to an appetitive stimulus based on a sucrose reward after an auditory cue," noted Aponte. "Our finding was that LEPR neurons drove the appetitive behaviors, but did not drive the consummatory behaviors."

Reducing the risk of addiction

Studies of the other neurons of interest, the PV neurons in the hypothalamus, have investigated whether they are involved in survival behaviors, in particular as a response to painful sensations.

Optogenetics techniques have shown the connection between activation of PV neurons and nociceptive behaviors of mice experiencing thermal discomfort, but Aponte's lab has investigated whether they also regulate other pain modalities.

"Our findings identify PV neurons as a functional component of the nociception response to inflammatory and neuropathic pain, as well as to noxious stimuli," said Aponte.

Using a miniscope platform attached to live mice allowed functional imaging of the PV neurons in response to hot and cold stimulus, the first time that the activity of PV neurons in the lateral hypothalamus has been recorded in vivo and during behavior.

This could have implications for pain relief in mice, and hence potential applications for humans dealing with chronic pain, where the pain is associated with an inability to continue performing daily activities.

Studies using chemogenetics, rather than optogenetics, showed that activation of the PV neurons could restore the innate nest-building behavior in mice after that behavior had been inhibited by discomfort induced in the animals by injection of acetic acid.

"Our work suggests that the PV neurons modulate different pain modalities," commented Aponte. "This may represent a novel translational target for pain management without the use of opioids, reducing the risks of opioid addiction."