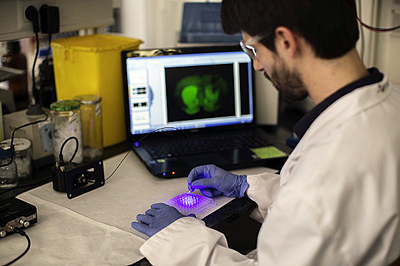 The Barcelona study provides the first example of a painkilling drug activated by light.

Optopharmacology is shaping a new horizon in the findings of new drugs and administration and control methods for pharmacological action. This discipline can help widening the therapeutic range to treat pain and notably reduce the unwanted effects of lots of drugs – for example the high risk of addiction in morphine, the NSAID low analgesic efficacy in severe and chronic pain, and so on.

Researchers at the Institute of Neurosciences of the University of Barcelona (UB) have taken part in the development of the first light-activated drug – known as JF-NP-26 – for the treatment of pain. The so-called “optopharmacology” technique, which has so far involved research with animal models (notably mice), has just been described in a paper in the open source journal eLife.

The new study is conducted by teams led by Professor Francisco Ciruela, from the Faculty of Medicine and Health Sciences and the Institute of Neurosciences (both at UB) and the Bellvitge Biomedical Research Institute (IDIBELL), and Amadeu Llebaria, from the MCS group of the Institute of Advanced Chemistry of Catalonia.

In general, regular pharmacology has certain limitations – typically, slow and imprecise distribution of a drug, lack of spatiotemporal traits in the organism, difficulties in dose adjustments, and more – which can limit therapeutic effects. 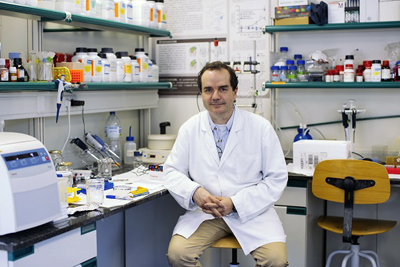 In this context, optopharmacology is an emerging discipline, based on the use of light to control drug activity. Using light to control photosensitive drug allows the pharmacological process can be managed with spatial and temporal precision.

The eLife article describes the design of the “photo-drug” JF-NP-26, which has powerful therapeutic applications to treat pain, based on a molecule that can be specifically activated at any desired moment with a burst of violet light.

Professor Francisco Ciruela commented, “In the clinical field, there is no precedent of the use of optopharmacology to improve pain treatment or such treatment of any disease associated with the nervous system. Our development is the first light-activated drug designed for the treatment of pain in vivo with animal models.”

In this latest optopharmacology development, a drug with a known action mechanism (for example, an analgesic) is chemically modified to make it photosensitive and inactive. This drug can then be activated when receiving via optical fiber light of a suitable wavelength delivered precisely onto the target tissue. 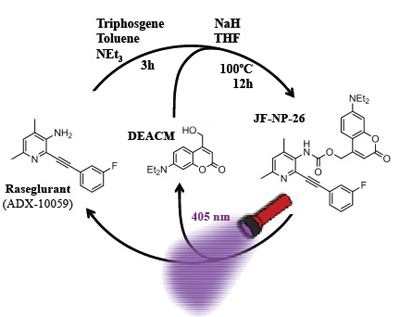 The drug is activated when illuminated at the correct wavelength by an optical fiber.

The drug JF-NP-26 is known as “photocaged”, a chemically and inactive molecule activated by light. Compared to other photosensitive compounds, it has no pharmacological effect on an animal until the target tissue receives light from a visible spectrum (in this case at 405nm). Moreover, JF-NP-26 does not show toxic or unwanted effects even if the dose is high - in short-term studies conducted so far.

So illuminating this e-drug releases the active molecule Raseglurant, which blocks the metabotropic glutamate type 5 (mGlu5) receptor, found in functions such as the spread of neuronal pain. Blocking this receptor allows preventing the pain from spreading into the brain. This can be produced both in the outlying neurons and in the central nervous system (brain) and creates, in both cases, an analgesic effect as a result.

Ciruela explained, “The molecule created by the action of the light, the raseglurant, does not belong to any group of drugs from the established list of pain-killing drugs. Consequently, the eLife study describes an analgesic mechanism which has not been explored enough so far.”

The raseglurant was examined in earlier clinical trials as an analgesic to treat migraine but was ruled out due its hepatoxicity. The new (UB) optopharmacology of the raseglurant can stop adverse effects in the liver and opens a new path to start using it as an analgesic”.