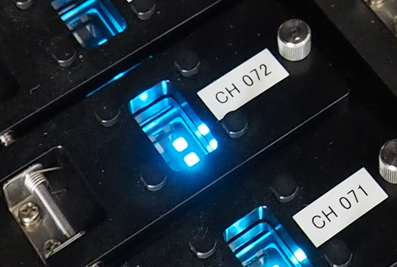 Employing a new combination of emitter molecules, researchers in Japan have demonstrated the promise of a novel approach to overcoming a challenge that has limited the performance of OLED displays: a blue light source to match the relatively better performance of the red and green ones.

By splitting energy conversion and emission processes between two molecules, the Kyushu University researchers have achieved devices that produce pure-blue emission at high efficiency, maintain brightness for relatively long times, and lack any expensive metal atoms — a combination of properties that has so far been difficult to obtain simultaneously.

The work is reported this week in Nature Photonics.

Known for their vibrant colors and ability to form thin and even flexible devices, organic light-emitting diodes, or OLEDs for short, use carbon-containing molecules to convert electricity into light.

Unlike LCD technologies employing liquid crystals to selectively block emission from a filtered backlight covering many pixels, the separate red, green, and blue emitting pixels of an OLED display can be completely turned on and off individually, producing deeper blacks and reducing power consumption.

However, blue OLEDs in particular have been a bottleneck in terms of efficiency and stability.

“A growing number of options exist for red and green OLEDs with excellent performance, but devices emitting high-energy blue light are more of a challenge, with tradeoffs almost always occurring among efficiency, color purity, cost, and lifetime,” commented Chin-Yiu Chan, a researcher at Kyushu University’s Center for Organic Photonics and Electronics Research (OPERA) and author on the study reporting the results in Nature Photonics.

While stable blue emitters based on a process known as fluorescence are often used in commercial displays, they suffer from a low maximum efficiency. So-called phosphorescent emitters can achieve an ideal quantum efficiency of 100%, but they generally exhibit shorter operational lifetimes and require an expensive metal such as iridium or platinum.

As an alternative, OPERA researchers have been developing molecules that emit light based on the process of thermally activated delayed fluorescence, commonly abbreviated as TADF, which can achieve excellent efficiency without the metal atom but often exhibits emission containing a wider range of colors.

“The range of colors a display can produce is directly related to the purity of the red, green, and blue pixels,” said Chihaya Adachi, director of OPERA. “If blue emission is not pure with a narrow spectrum, filters are needed to improve the color purity, but this wastes emitted energy.” 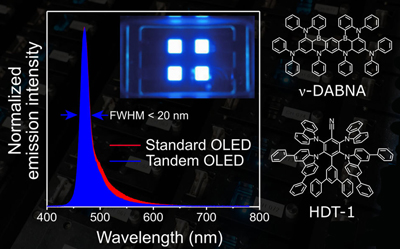 Takuji Hatakeyama’s group at Kwansei Gakuin University recently reported a promising path to overcome the purity issue based on a unique molecular design for a highly efficient, pure-blue TADF emitter, but the molecule, named ν-DABNA, quickly degrades under operation.

Collaborating with Hatakeyama, the OPERA researchers have now found that lifetime can be greatly improved while still obtaining narrow emission by combining ν-DABNA with an additional TADF molecule developed at OPERA as an intermediate, high-speed energy converter.

“Three-fourths of electrical charges combine to form energy states called triplets in OLEDs, and TADF molecules can convert these non-emitting triplets into light-emitting singlets,” commented Masaki Tanaka, an OPERA researcher who worked closely with Chan on the study.

“However, ν-DABNA is somewhat slow at converting the high-energy triplets, which often play a role in degradation. To get rid of the dangerous triplets more quickly, we included an intermediary TADF molecule that can more rapidly convert triplets into singlets.”

“Compared to most emitters, the wavelengths that ν-DABNA can absorb are very close to the color it emits. This unique property makes it able to receive much of the energy from the wide-emission intermediary and still emit a pure blue,” said Chan.

Using this two-molecule approach, which has been termed hyperfluorescence, the researchers achieved longer operational lifetimes at high brightness than previously reported for highly efficient OLEDs having a similar color purity.

“That this kind of approach can extend the lifetime of pure-blue emission from a molecule we previously developed is really exciting,” said Hatakeyama.

Adopting a tandem structure that basically stacks two devices on top of each other to effectively double the emission for the same electrical current, lifetime was nearly doubled at high brightness, and the researchers estimated that devices could maintain 50% of their brightness for over 10,000 hours at more moderate intensities.

“Though this is still too short for practical applications, stricter control of fabrication conditions often leads to even longer lifetimes, so these initial results point to a very promising future for this approach to finally obtain an efficient and stable pure-blue OLED,” said Adachi.

Chan concluded, “In the near future, I hope that blue hyperfluorescence OLEDs can replace current blue OLEDs for ultra-high-definition displays.”