Australian firm to establish US manufacturing capacity that could eventually produce 19 million tests per month. 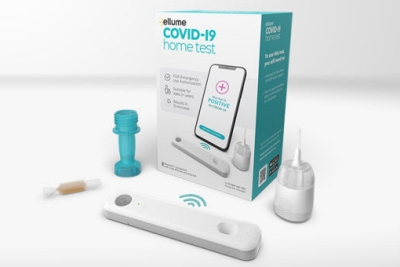 Ellume, a Brisbane, Australia, company that has developed an optics-based rapid antigen test for Covid-19 suitable for home use, has won a $232 million contract with US authorities that should lead to a huge increase in production.

Said to be the the first rapid self-test for Covid-19 detection authorized by the US Food & Drug Administration (FDA) for both asymptomatic and symptomatic use without a prescription, Ellume’s device relies on fluorescent nanoparticles and simple optoelectronics.

The new contract, awarded by the US Department of Defense, will see Ellume establish its first manufacturing site in the US. The company says that, once completed, the new facility will enable it to increase production capacity by half a million test kits per day.

The FDA had granted emergency use authorization for the test in December, following a study involving nearly 200 people that simulated home use of the test kit. The kits are expected to sell for around $30.

Clinical study
According to Ellume’s product information aimed at healthcare professionals, the test is based on pre-mixing and binding of a fluorophore specific to SARS-CoV-2 with viral protein present in a patient sample.

It works by rapidly flowing a sample collected from a nasal swab across a membrane and then through a series of discrete capture zones.

A result is then computed by an on-board microprocessor, and communicated to a smart phone application. Ellume says that the test kit takes 15 minutes to produce a result.

In a clinical study carried out in the US late last year, the test kits correctly identified 96 per cent of positive symptomatic cases subsequently confirmed using the now-standard polymerase chain reaction (PCR) diagnostic test for Covid-19.

“In people without symptoms the test correctly identified 91 per cent of positive samples and 96 per cent of negative samples,” adds Ellume, indicating that both false positive and false negative results can be generated.

Ellume sees that performance with asymptomatic infections as critical. “With the CDC reporting that at least 50 per cent of Covid-19 cases are transmitted asymptomatically, Ellume’s test will play a crucial role as the only diagnostic tool authorized for non-prescription use as a screening tool in the US,” stated the firm.

Flu and TB
Founded in 2010 by current CEO Sean Parsons, Ellume says that it has been developing the core technology at the heart of the test kits for more than ten years.

Previously an emergency and intensive care clinician, Parsons set up Ellume following the swine flu pandemic that hit Australia in 2008. At that time, laboratory tests took several days to return results, while the small range of rapid influenza tests that were available lacked both accuracy and reliability.

In collaboration with Netherlands-based Qiagen, Ellume has also developed a “hub” test kit for Covid-19 that handles up to eight patient samples simultaneously, and performs up to 32 tests per hour.

Aside from the Covid-19 test kits, Ellume is working on rapid test kits for diagnosing both tuberculosis and influenza, and previously agreed a partnership with pharmaceuticals giant GlaxoSmithKline.