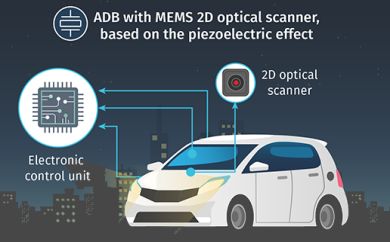 Road safety technology incorporated into modern vehicles continues to reduce the dangers for pedestrians and other drivers, but one million deaths each year still occur on the world's roads.

Driving at night is one significant cause of accidents, making the vehicle's headlights and forward-facing illumination particularly important for a safe journey.

Adaptive driving beam (ADB) technology, in which a car's headlights automatically adjust based on speed and driving conditions, is an attractive answer. ADB could for example automatically enable upper beam headlamps when required, and then adapt their beam patterns around oncoming and preceding vehicles.

At present, however, commercial ADB systems suffer from limited controllability. Spatial light modulators based on liquid crystal pixels or digital micromirrors can help alleviate this problem, but are expensive to implement and lead to heat loss from un-utilized light power.

A project at the University of Tokyo has now developed a new ADB system built around a MEMS optical scanner, which might provide a more versatile platform. The work was published in the Journal of Optical Microsystems.

"We have developed a MEMS two-dimensional optical scanner to produce various illumination patterns from a phosphor luminescent material, which are projected forward through the imaging lenses," commented the project in its published paper.

The system's design involves attaching a thin lead-zirconate-titanate oxide (PZT) film to a silicon-on-insulator wafer, creating a structure which can then piezoelectrically excite the mechanical oscillation of a scanning mirror in controlled ways.

In use, the oscillations of the mirror are used to direct light from a 450-nanometer 3.5-watt blue laser diode onto the phosphor luminescent material in various illumination patterns, with the white light generated from the phosphor then being directed outwards through suitable lenses.

"What is unique about this setup is that the laser beam is converted into white light at high efficiency, which reduces heating of the ADB system," noted Hiroshi Toshiyoshi from the University of Tokyo.

The Tokyo team arranged the actuation in its ADB architecture so as to allow for large-angle horizontal and vertical deflections of the scanner, which enables two-dimensional scanning of the headlight beam, and also designed the modes of the mechanism so that it did not react to low-frequency noise, such as that arising from other vehicles.

In trials, the ADB system was incorporated into an assembled headlight block and mounted onto the right-hand side of a vehicle. As proof of concept, two MEMS-ADB modules to cover high- and low-areas of illumination were employed, although a single MEMS module capable of both would be the ultimate goal. A camera and image recognition function were installed to interpret the road conditions and adjust the ADB accordingly.

The researchers found that the system provided the driver with better visibility, especially when it came to seeing pedestrians. It could visualize a pedestrian standing next to an oncoming vehicle while modulating the light to avoid dazzling the other driver.

"While this technology certainly advances drive-assist technology, it also has other potential applications in light detection and range finding, as well as inter-vehicle optical communication links," noted the project. "The system could find use in self-driving technology of intelligent traffic systems in the future, taking us another step toward risk-free driving."