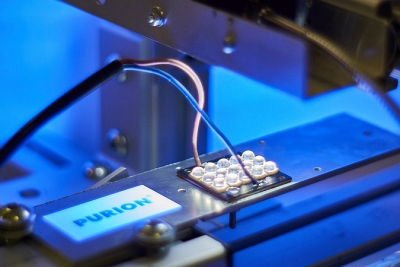 Osram’s “Fluxunit” investment division has acquired a significant equity stake in Bolb, which is developing deep-ultraviolet (UVC) LEDs for chemical-free disinfection of pathogens in air, water, and on surfaces - including efforts to mitigate coronavirus transmission.

The Germany-headquartered lighting company led a $16 million round of series A venture funding in exchange for 20 per cent ownership of Livermore-based Bolb.

Other investors in the round include Southeast Asian UVC-Tech Group, and the Silicon Valley based venture investor Walden International. Bolb says that the new funds will be used to expand its manufacturing capacity and global sales effort, among other things.

Transparent epitaxial stack
Founded in 2014 by former Lumileds senior scientist Ling Zhou, now CEO, and CTO/chairman Jerry Zhang, Bolb says it has developed a new way to deposit light-emitting structures based on compound semiconductor materials that are said to offer a more compact and efficient way to destroy viruses and bacteria than existing UV disinfection technologies.

Jens Milnikel, who heads up the “illumination product line” at Osram’s Opto Semiconductor division, said in a release from the companies: “Bolb's proprietary technology and platform have produced, by far, the world's highest efficiency UVC LEDs.

“Our Series A investment will allow Bolb to significantly expand its business and fund additional engineering activities to advance its product roadmap, which will allow Osram to foster its technology portfolio in this growing field of germicidal solid-state disinfection.”

Osram’s CEO Olaf Berlien added: “Osram already has various UVC light solutions for disinfection, including LED and traditional technologies. The strategic investment in Bolb strengthens our know-how in the UVC LED field and gives Osram a leading position in the market for disinfection with non-visible light.”

Tuned to the DNA-specific absorption peak at 265 nm, Bolb claims that its UVC LED chips are even more efficient than those from rivals emitting at longer wavelengths - thanks to the transparent hole supplier layer in the epitaxial design.

The advance suggests that UVC LEDs fabricated this way might approach the kind of efficiency and ubiquity already achieved by LEDs in the visible range, for myriad lighting applications.

“Bolb's UVC LEDs are world leading, delivering up to 200 mW of performance per emitter and exhibiting safe deactivation of lethal pathogens, including SARS-CoV-2, in [the] shortest possible time,” boasts the firm.

Superbug elimination
In December 2019 the company reported that its UVC emitter fixtures were able to kill the antibiotic-resistant “superbug” MRSA quickly and effectively, suggesting a potentially huge positive impact of the technology on both patient outcomes and hospital costs.

“Such a high kill rate was achieved with its deep-UV G-LED [i.e. germicidal-LED] array in under one minute from a distance of one meter to the targeted surface, covering approximately one square meter in area,” stated the firm.

“Using compact solid-state G-LED technology, this is unmatched performance against a particularly egregious pathogen. Multiple arrays can be assembled and positioned to cover larger areas for quick disinfection.”

Osram quotes figures suggesting that the annual market for UV disinfection will grow rapidly from around $1 billion currently, to be worth some $4 billion by 2027.

It adds that future cooperation with Bolb will include efforts to accelerate the industrialization of highly efficient and high-performance UVC LEDs.

“Unlike previous solutions, LED-based disinfection systems require very little space and can be installed directly at the point of use - such as in water taps, washing machines or ventilation systems,” Osram said. “Space-saving disinfection solutions make an important contribution to combating the coronavirus.”

Currently, UVC disinfection is almost entirely based on the use of mercury vapor lamps, with UV LED options available but typically limited in terms of power and efficiency - making them much more expensive to deploy.

But Osram says that the specific approach being taken by Bolb is now delivering efficiency values that are far superior to other products available on the market.

Fluxunit chief Ulrich Eisele said: “With Osram's decades of experience in the development and manufacturing of semiconductor-based products, this partnership sets the course for Osram and Bolb to lead the market for UV-C LEDs.”

With the investment in place, Bolb becomes the latest company to join the Fluxunit portfolio. Others include the lidar technology developer Blickfeld, holography software company VividQ, and the optoacoustic imaging firm iTheraMedical.