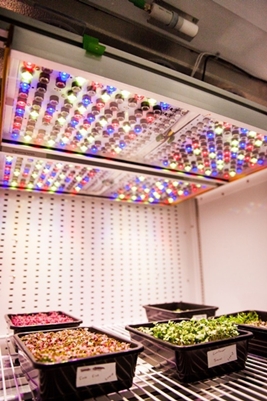 Germany-headquartered lighting giant Osram is working closely with NASA on a LED-based horticultural lighting system being honed for deployment in space.

Osram has customized one of its “Phytofy RL” systems, with the joint research effort focused on growing salad-type crops at the Kennedy Space Center initially, but ultimately for crews during space travel.

Specific wavelengths
Osram, whose Opto Semiconductors division has developed LEDs emitting at specific wavelengths to optimize growth of a wide variety of plants and flowers, says this allows the system to adapt specifically to the needs of various plants. It has also developed proprietary software to control the system.

The company recently installed a Phytofy RL system inside a growth chamber at the Kennedy Space Center in Florida, with plans to move the equipment to one or more of the site’s walk-in plant growth rooms in the future.

Among Phytofy’s key features is an ultraviolet channel that provides researchers with the ability to test how plants react and change to a brief burst of UV light.

The software element includes an irradiance “map” that will allow the NASA team to observe irradiance without the need to measure each setting separately before changing the lighting effects.

“Osram’s smart horticulture lighting system is being piloted through a series of collaborations with universities and research labs around the world that are using the technologies and sharing insights,” announced the company.

“At NASA, Phytofy RL will allow researchers to easily adjust lighting conditions to optimize plant growth in various conditions and then replicate those settings in the Advanced Plant Habitat on the International Space Station, meeting the sophisticated needs of space food production.”

“Special light recipes optimize not only yield and growing time but also can increase the amount of vitamins and nutrients in the plant, and can enhance certain tastes and flavors,” added Osram in a release. “LEDs not only provide tailor-made bioactive lighting, but are also very efficient.”

Target sectors
Steve Graves, the company’s strategic program manager for “urban and digital farming”, said: “Many of the world’s coolest and most beneficial inventions have come from scientists at NASA over the past several decades, and to play a role in empowering further innovation through the use of our technologies is an honor.

“We are excited about the possibilities Phytofy RL will bring to a wide variety of horticulture applications, and our teams are excited to continue learning and refining its setup before ultimately bringing this exclusive solution to market within the next year.”

The connection with NASA came about through US-based greenhouse and hydroponics company Hort Americas. According to Osram, members of NASA's food production research team presented Hort Americas with a list of features they wanted from a lighting fixture, and the US firm then arranged a hook-up with Osram to learn more about the technology, said to be unlike anything else currently available commercially.

Aside from the NASA work, the lighting company says it is working closely with both industry and the research sector to provide novel lighting systems that optimize crop development. Target areas include retail food and flower markets, food processing facilities, and the pharmaceuticals sector.