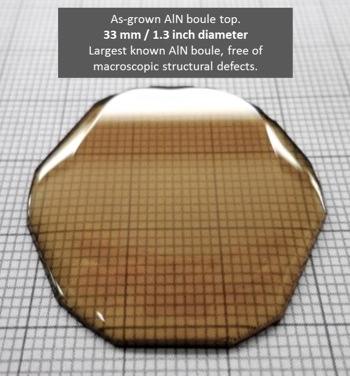 Osram is poised to extend its already huge offering in LED chips into the deep-ultraviolet spectrum, after signing a “long-term” licensing deal with the US technology company HexaTech.

Growth area
While the LED market in general is maturing quickly as the lighting industry continues a widespread switch to solid-state technology, deep-UV LEDs remain at a much earlier stage of development, somewhat analogous to the position blue LEDs were in 15 or 20 years ago.

But some see an extremely bright future for UV-LEDs, and expect a market worth hundreds of millions of dollars to emerge in the coming years, with applications in water and air sterilization to the fore.

The difficulty has always been to produce reliable, high-power emitters at the kind of wavelength needed for effective disinfection – around 265 nm. And, as with visible-range LEDs, part of the key to volume production is the availability of high-quality substrate materials on which defect-free light-emitting semiconductor layers can be grown.

That’s where HexaTech comes in. Over the past decade or so, it has been working on single-crystal AlN, which provides an excellent match for the crystal lattice structures of the active elements grown for UV LED emitters.

The problem is that AlN is an extremely difficult material to deal with. For cost-effective volume production, high-quality wafers at least two inches in diameter are required, for compatibility with the compound semiconductor production equipment used by manufacturers.

HexaTech CEO John Goehrke said in a joint company release: “By licensing our technology, Osram is able to accelerate [its] UV-C LED device development based on HexaTech’s material, and we are able to focus on our core competency, supplying world-class AlN substrates.”

Hans-Juergen Lugauer, who heads up UV-LED research and development at Osram’s Opto Semiconductors subsidiary, added: “Through Osram’s strategy of actively expanding our non-visible optoelectronic product portfolio into the UV-C wavelength range, we are poised to capitalize on this rapidly growing market segment.”

Water sterilization
Lugauer said that the long-term deal with HexaTech, originally a spin-out from research into wide-bandgap semiconductors carried out at North Carolina State University (NCSU), would allow Osram to develop highly efficient and reliable deep-UV devices, and establish itself as the “dominant high-performance optoelectronic technology provider from the deep-UV through infrared wavelengths”.

In July last year, HexaTech announced that its own research team had developed a powerful, reliable UV-C LED emitting at 263 nm, offering twice the radiant flux of other devices on the market – an important attribute for applications in the sterilization of running water.

Rival developers include Crystal IS, another US high-tech spin-out company specializing in wide-bandgap semiconductor materials, albeit one that was acquired by the Japanese firm Asahi Kasei back in 2011.

Via its “Klaran” product range, Crystal IS offers up to 30 mW of power at wavelengths between 250 nm and 280 nm, although typically the powers offered are lower at the shorter wavelengths in the range.

Other providers include Japan’s Nikkiso, which offers 12 mW of power at 265 nm, and owns the UV-C LED lamp developer Aquisense.

Another key player in the UV-LED sub-sector is Sensor Electronic Technology (SETi), although its UV-C devices are typically less powerful than those developed by Nikkiso, HexaTech and Crystal IS.

$500M+ market
Back in 2012, the French market analyst company Yole Développement said that it expected the market for UV-LEDs to be worth $150 million by 2016. Then it 2015 the same firm predicted that 2017 would represent the start of a second “growth cycle” for the sector, driven by applications in purification and disinfection.

Noting the presence of industry giants Philips Lumileds and LG Innotek on the fringes of the market, Yole predicted that the UV-LED market should be worth more than $520 million by 2019.

Another UV-C LED protagonist emerged last year, in the form of California-based RayVio. Just over a month ago the Boston University spin-out followed up on its $9.3 million series B financing round by announcing what it claimed to be the industry’s first 60 mW UV LED to reach volume production levels.

Operating at the slightly longer wavelength of 280 nm, but still within the germicidal range, these devices are being aimed at medical and public health applications, including disinfection of running water and sterilizing “pods” for baby bottles.