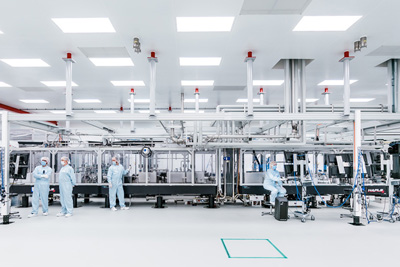 The L3-HAPLS laser and researchers, located in in Dolní Břežany, Czech Republic.

Operation of the L3-HAPLS laser at 0.5 petawatt level has been demonstrated at ELI Beamlines Research Center, in Dolní Břežany, Czech Republic, the organization announced this week. The achievement consisted of the compression of the full energy output pulses currently generated by the laser chain, in the center’s petawatt vacuum compressor.

In the demonstration run, the L3-HAPLS pump laser was operated at 101 J energy, driving the high-power Ti:sapphire short-pulse amplifier and resulting in 17.7 J of pulse energy at the output of the chain, before entering the vacuum pulse compressor. The energy of the generated output pulses was highly stable with only 0.4 percent fluctuations.

Josef Cupal, leader of the L3-HAPLS laser team, explained, “By accounting for reflectivity of the compressor gratings, compressed pulses with 13.3 J of energy were generated, with duration of 27.3 fs. This corresponds to peak power of about 490 TW, or 0.49 PW.

“The long-term performance of the laser was verified previously without the Petawatt vacuum compressor, demonstrating that the laser is stable during continuous operation longer than one hour. Together with the 3.3 Hz repetition rate and pulse duration of less than 30 fs, this is the highest laser peak power ever demonstrated.”

He continued, “The L3-HAPLS laser team worked hard during the last year to overcome several operational challenges and to get ready for commissioning experimental campaigns planned for the second half of this year. Finishing these campaigns successfully will be a key step towards opening the high power experimental stations to the user community.”

The ramping of energy of the full system through the compressor to the 0.5 PW level was perfromed gradually in about 30 steps. After the run, a thorough visual inspection of the diffraction gratings and other optical components inside the compressor was made. No problems were found and the L3-HAPLS system is now ready to start sending the short-pulse high-power beam to the experimental halls.

The L3-HAPLS laser system represents a new generation of diode-pumped, high-energy and high-peak-power laser systems. The laser will serve in many areas of basic and applied research.

Temporal shape of the L3-HAPLS pulse compressed to 27.3 fs (left), and the laser beam at the ouptut of the vacuum compressor (right).

Its most significant applications include compact laser particle accelerator for new medical methods and short-wave X-ray generation for high-resolution spatial and temporal resolution microscopy for material and medical research. The initial experiments will be focused on Plasma Physics and Ion Acceleration.

A wide coalition of industrial partners was invited to develop the L3-HAPLS laser, which was designed, developed and constructed by Lawrence Livermore National Laboratory and delivered to ELI Beamlines in June 2017.