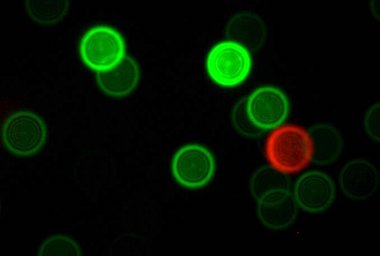 Calibrating and characterizing the performance of fluorescence microscopy systems is an important part of imaging operations, and as the microscopy platforms have become more advanced, so calibration methods need to keep up.

In particular, current non-linear multimodal techniques need calibration targets that are not susceptible to bleaching and can operate across the different modalities employed.

A project at the University of Illinois at Urbana-Champaign (UIUC) has now demonstrated a calibration target based on fluorescing nanodiamond structures, which could ensure consistent performance in forthcoming microscopy platforms.

As reported in Photonics Research, the breakthrough tackles a common hurdle in fluorescence microscopy, whereby the tiny beads often used as calibration targets are not always suitable for use with multiple imaging channels, or in targets that are prone to rapid bleaching.

Fluorescent nanodiamonds offer a solution, as they have excellent photostability and do not show signs of bleaching over several hours of use, according to UIUC.

"There is potential that this is going to become a standard calibration tool in fluorescence microscopy worldwide," commented Mantas Žurauskas of UIUC's Beckman Institute for Advanced Science and Technology. "This is so convenient, and so easy to use, that it is hopefully going to make a large impact."

The optical properties of fluorescent nanodiamonds have been exploited in photonics applications for some time. In 2018 a project at Finland's VTT research lab introduced the materials into 3D printing to alter the effect of lasers on the thermal conductivity of feedstock raw materials.

A 2020 project at RMIT University showed how glass fiber doped with such microparticles could act as a magnetic field sensor, relying on the way that a particular point defect in diamond, a nitrogen-vacancy center, can generate photoluminescence.

One of the purposes of the square grid is to facilitate finding the same area during repeated imaging events, according to the team, although it can also serve as a microscopic ruler for measuring the size of the area being imaged.

Trials of the new targets confirmed that they were suitable for nonlinear multichannel imaging, whereby imaging signals from four modalities - second- and third-harmonic generation from nanodiamonds plus fluorescence from NV and NVN color centers - was collected for imaging purposes.

The team noted that nanodiamonds emitting fluorescence at 450 nanometers are becoming available, providing coverage for the blue end of the spectrum and increasing the potential areas of applicability for the technique.

"We currently have two companies evaluating the phantom," said Žurauskas. "LiveBx, a small spinoff of the university, is interested in how these phantoms can be used to improve their system. Industry partner GlaxoSmithKline is working to assess the new phantom for quality control applications in its own biomedical research labs."