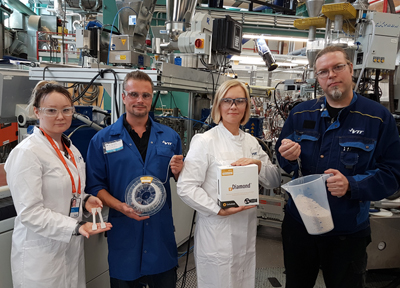 Finnish research laboratory VTT and firm Carbodeon have developed a plastic material suitable for consumer and industrial use, enabling faster 3D printing and improving the mechanical durability of the printed products – known as printouts.

The uDiamond filament, patented by Carbodeon and now available on the market, for both industrial and private use, is said to improve the usability of 3D technology and broaden the applications of 3D printing, whether by thermal nozzle or laser printing methods. Besides the 3D printing of products, a notable application of the new material is in optical coatings with selectable refractive indices.

The performance of the new 3D filament is based on the nanodiamond particles it contains and their ability to shape the structure and properties of the material, say the developers. The specification states, “the material's spherical nanodiamonds act like a lubricant and do not increase the clogging of the printer nozzle.”

Nanodiamonds improve the thermal conductivity of the resulting plastic material, which can help increase 3D printing speed. In Carbodeon's own tests, the printing speed could be increased up to 500 mm/s. In addition, the mechanical properties of the material were improved. For example, Nanodiamond-reinforced PLA plastic is also easy to print with consumer-grade printers.

Vesa Myllymèki, Carbodeon CEO, commented, “This is the first product of a family that will be sold as a finished 3D filament and in a granular format, as well. VTT has been a long-term partner in this development, and has reacted to our needs quickly."

The partners have developed methods for evenly dispersing the nanodiamonds in the PLA material in such a way that the finished product is a PLA composite optimised for 3D printing, manufactured at industrial scale. In addition, VTT has tested the properties of plastic materials and 3D printouts.

Jarmo Ropponen, Research Team Leader at VTT's chemical pilots, said, “Using our chemical pilot devices, we at VTT produced the nanodispersed material required for the melt processing, and thus supported the creation of a new product."

“The melt processing of plastics became easier and the mechanical characteristics were improved with the introduction of nanodiamonds. Based on the preliminary tests, the modulus of the 3D-printed test pieces was improved at best by more than 200% compared to the PLA-based filament already on the market. VTT’s Polymer Pilot produced the first 600 kg material batch, which Carbodeon had refined into a commercial product," said Satu Pasanen, Research Scientist at VTT in charge of the plastic piloting in the development. 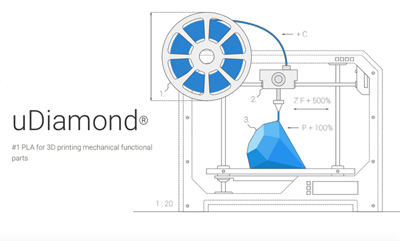 A diamond nanoparticle or a nanodiamond, produced by material explosions, is one of the thermally most conductive and hardest materials known. Besides solid products, a notable application area of the new material is in optical coatings with selectable refractive indices.

Carbodeon says its uDiamond¿ contains diamond nanoparticles with a diameter of 4 to 6 nm. These nanodiamonds are non-toxic materials suitable for a variety of applications according to REACH (EU chemical) and EPA (US Government chemical) assessments.

Although nanodiamonds are used in the materials at very low concentrations, they can significantly improve material performance at a low cost, says Carbodeon.