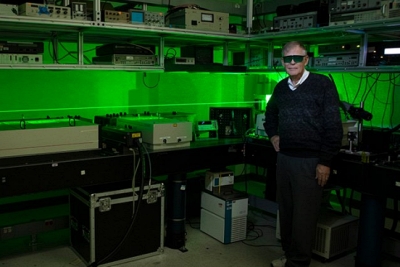 Stanford University professor Robert Dyer has been revealed as the winner of the inaugural SPIE Maiman Laser Award, a new annual prize created by the international optics and photonics society.

Launched to mark the 60th anniversary of the first demonstration of a laser, SPIE says that the motivation is to recognize individuals who have made sustained contributions to laser source science and technology “at the highest level”.

Key contributions
Byer, who is co-director of the Stanford Photonics Research Center and also holds a position at the SLAC National Accelerator Laboratory, is an acknowledged pioneer in diode-pumped solid-state (DPSS) lasers and nonlinear optical sources.

Among his key contributions are development of the first tunable red laser and Q-switched unstable resonator Nd:YAG source, as well as the first demonstration of remote sensing using tunable infrared sources and the coherent anti-Stokes Raman scattering (CARS) technique.

The author of more than 50 patents, Byer says his favorite is that for a green laser pointer - a development that is said to have resulted directly from a student's question during class.

That invention has found use beyond the lecture theater - other applications have included astronomy, a rescue flare for sailors at sea, and in laser-projected televisions - while Byer has been researching and teaching lasers and nonlinear optics at Stanford since 1969.

In fact, Byer’s first laser research paper was published just a few years after Maiman’s seminal demonstration of a ruby laser at the Hughes Research Laboratories - close to where Byer was raised. More recently he has turned his attention to gravitational waves, as part of the team using lasers to detect ripples in space-time generated by giant cosmic collisions.

"I grew up in southern California surfing ocean waves from San Diego to Malibu Beach," Byer told SPIE. "My career has been in lasers and nonlinear optics, where I have had the good fortune of surfing light waves with colleagues and friends from around the world.”

Byer describes Maiman's seminal development as “opening the door” to the laser's myriad applications, from optical communications to the detection of gravitational waves. “I am thrilled to be selected as the inaugural recipient of the SPIE Maiman Laser Award,” he said.

"Bob has been a tireless pioneer and promoter of solid-state laser technology for decades. He has worked on and developed new laser physics and technology, novel materials, and large, high-impact science projects based on key laser technology such as gravity waves, laser fusion, and particle acceleration.”

Keller also pointed to the level of commercial impact and international collaboration associated with Byer’s work, adding: “And, for me personally, as a former graduate student, he is simply one of the most inspiring professors at Stanford."

Martin Richardson, founding director of the Townes Laser Institute at the University of Central Florida's College of Optics and Photonics (CREOL) and a member of SPIE’s awards committee, points out that Maiman’s demonstration also represented the first operation of a solid-state laser source.

“At that time, there was a global race to demonstrate the first laser, involving many different research groups, nearly all chasing this dream by using electrical excitation of gaseous media,” Richardson recalls.

“It was Maiman's insight and understanding of the atomic physics of ruby, and his recognition of using transient optical pumping that led to his pioneering success.