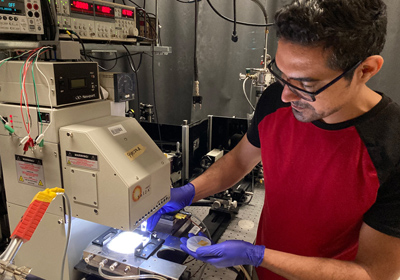 Hadi Afshari analysing PV cells on the solar simulator in the Sellers Lab.

One of the greatest challenges of solar cells is the Shockley-Queisser limit, the assumption that there is a fundamental limit to the amount of energy a solar cell can absorb and convert into usable energy. University of Oklahoma physicist Ian Sellers is showing that this long and widely held assumption is false.

Sellers, an associate professor in the Homer L. Dodge Department of Physics and Astronomy in Oklahoma’s Dodge Family College of Arts and Sciences, has received a $310,000 grant from the US National Science Foundation to demonstrate the utility of some commonly used semiconductors to significantly increase the efficiency of solar cells.

“It was always assumed a semiconductor could only convert so much energy from the sun because it would either lose energy as heat or that sunlight would be too low-energy to be captured,” said Sellers. “It was considered that this single gap limit could not be overcome. What we found was a physical effect that exists in conventional optoelectronic materials already used in space solar cells.”

“This is a natural effect, not related to exotic quantum structures or processes, and we realized we could make quite simple solar cells based on conventional materials already used in optoelectronics for lasers, LEDs and all kinds of things that has the potential for us to realize a very high-efficiency solar cell.”

The potential efficiency that could be realized through this process increases what until now has been considered the industry standard limit of approximately 30%, to a breakthrough maximum efficiency of greater than 60%.

“One of the major problems with solar cells is that, currently, most commercial solar cells can only harness about 20% of the sun’s energy,” said Sellers. “These solar cells absorb high-energy light from the sun and any excess energy turns into heat. It warms up the material and that’s a loss – it’s not something a conventional solar cell converts to electricity.”

A commonly used group of semiconductors known as III-V semiconductors, and what Sellers refers to as the “workhorse” systems of optoelectronics, generate and conduct this unwanted heat very efficiently, making this a big problem for conventional solar cells.

Sellers and a colleague at Arizona State University considered a potential new approach to harness this lost energy and more effectively convert sunlight to electricity before the generation of heat occurs. “I started working with a theorist at Arizona who was working on high-mobility transistors where the effect we’re using is a problem for high-mobility transistors,” said Sellers.

“What we’ve found is the ability to store excess energy in the material prior to heat generation, and we can store it there for long enough that our charge carriers, the electrons created by light absorption, can potentially be extracted before the energy is lost as heat. What’s cool about this work is that there isn’t anything exotic – it’s always existed,” he added. “It’s a natural process that is a problem in certain transistors, but for solar, it could be extremely beneficial.” 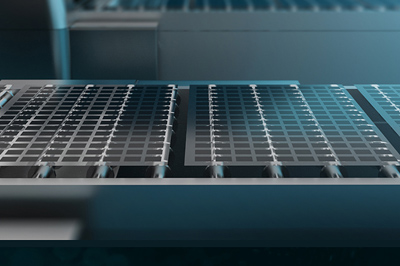 Ambient and UEI to develop solar power units for gadgets

Ambient Photonics and Universal Electronics have agreed to work together to reduce the economic and environmental impact of disposable batteries and improve convenience in consumer devices.

By embedding Ambient’s light energy harvesting photovoltaic (PV) technology into connected devices they intend to eliminate the replacement and labor costs required to replace batteries as well as reduce the carbon footprint of a battery-powered device by up to 90 percent. The companies will reveal more details of their current work together at CES 2022 in Las Vegas, Nevada, (January 7th-10th, 2022).

“Ambient’s low light PV cells are smarter in every sense of the word, delivering a new generation of hassle-free connected devices of uncompromising quality that are also sustainable,” commented Arsham Hatambeiki, SVP Product & Technology for UEI.

“UEI has benchmarked the performance of our novel solar cells to validate the enormous market potential for self-powered devices,” commented Ambient CEO Bates Marshall. “Our collaboration serves to bring both cost savings and sustainability benefits to a market that has been constrained far too long by battery-based power systems.”