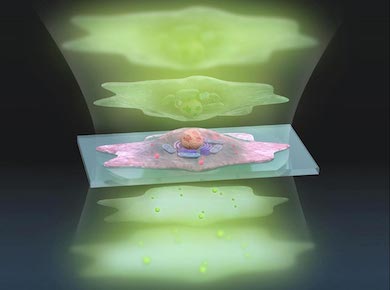 A project at the University of Tokyo could lead to enhanced imaging of living cells without the need for dyes or stains.

The technique is based on quantitative phase imaging (QPI), in which structural information is revealed by the change in optical path-length, and hence phase shift, that takes place when photons pass through biological tissue.

Consequently, improvements to the overall sensitivity of the QPI technique so as to allow these advances to be fully exploited has become a focus of research.

The Tokyo project set out to develop a more sensitive QPI method through a combination of wavefront shaping and dark-field techniques, and reported the results in Light: Science and Applications.

"To see greater detail using the same image sensor, we must expand the dynamic range so that we can detect smaller phase changes of light," said Takuro Ideguchi from the University of Tokyo Institute for Photon Science and Technology.

In its published paper, the project notes that conventional QPI techniques are not normally able to detect small optical phase delays because the image sensor is dominantly exposed to strong unscattered light, which brings no useful information and contributes to shot noise.

Tackling this issue led to the development of adaptive dynamic range shift quantitative phase imaging, or ADRIFT-QPI. ADRIFT involves taking two exposures, in light- and dark-field, to measure large and small changes in light phase separately, and then combine the two sets of data to create a highly detailed final image.

Additional computer analysis then reconstructs a final image of the sample with an expanded dynamic range from the two measurement results.

"The first exposure is produced with conventional quantitative phase imaging: a flat sheet of light is pulsed towards the sample and the phase shifts of the light are measured after it passes through the sample," explained the project team.

"A computer image analysis program develops an image of the sample based on the first exposure, then rapidly designs a sculpted wavefront of light that mirrors that image of the sample. A separate wavefront shaping device then generates this profile with higher intensity light for stronger illumination, and pulses it towards the sample for a second exposure."

In trials using silica microbeads, followed by imaging of live cell specimens, ADRIFT was able to expand the dynamic range of QPI and effectively improve the technique's sensitivity by a factor of 6.6.

Since ADRIFT adaptively shifts the dynamic range of QPI regardless of the sample condition, the technique has the potential to be as sensitive as the state-of-the-art wide-field scattering imaging techniques, according to the researchers.

Takuro Ideguchi commented that the true benefit of ADRIFT-QPI is its ability to see tiny particles in context of the whole living cell, without needing additional labeling.

"For example, small signals from nanoscale particles like viruses or particles moving around inside and outside a cell could be detected, which allows for simultaneous observation of their behavior and the cell's state," said Ideguchi.