University of Colorado Boulder phase-control technique is an order of magnitude faster than other technologies. 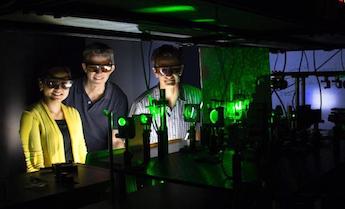 Scattering of light as it passes through tissue is a significant barrier to imaging cleanly in biological media such as blood and skin.

Wavefront shaping (WFS) is known to be a possible solution, in which the scattering that occurs as coherent light passes through tissue is tackled through careful control of the incident wavefront first entering the sample.

If the incident wavefront can be shaped and controlled at timescales shorter than that of the dynamic scattering caused by the media, through a suitable adaptive feedback process, then the scattering distortions can be compensated for and an enhanced intensity of light created at a desired point within the target.

The challenge has always been the speed of WFS required, especially for imaging of a biological process such as blood flow within tissue, where the useful lifetime of a given scattered speckle pattern before it alters and can no longer be used as a guide is in the millisecond range.

A project at University of Colorado Boulder has developed a possible solution, by using a one-dimensional spatial light modulator (SLM) to control the incident wavefront, rather than the relatively slow 2D SLMs commonly used. The work was published in Nature Photonics.

"The key breakthrough is the use of a fast 1D SLM rather than a 2D SLM, with each 1D illuminating mode being turned into a 2D speckle field once it propagates through the scattering medium," commented Omer Tzang of CU Boulder.

"This leads to a faster overall operation, because the 1D SLM can carry out its modulation of the wavefront considerably faster than a 2D SLM can, due to the relative simplicity of its electronics and manufacturing. This also means that 1D SLMs could be significantly less costly, which is an important practical consideration for future applications."

The project employed a grating light valve (GLV), consisting of parallel rows of reflective silicon nitride micro-ribbons effectively allowing 1,088 degrees of freedom, as its 1D SLM. Electronically controlling the deflection of the ribbons allows a GLV to control the wavefront it reflects on towards the sample, functioning as a programmable 1D phase modulator.

In the CU Boulder project, the GLV allowed switching times below 300 nanoseconds and repetition rates of 350 kHz, along with continuous phase modulation.

In trials directing light into various dynamic scattering samples, and implemented alongside dedicated software, hardware and optical design developed by the project, the system was able to continuously measure the resulting transmission matrix, calculate the optimal wavefront, and use that to project a focus through the scattering medium in real time, all within 2.4 milliseconds per cycle.

"Our system is faster by more than an order of magnitude compared to systems with digital mirror devices (DMDs), the MEMS SLMs that were considered the gold standard for high-speed operation thus far." said Tzang. "Compared to the most rapid liquid-crystal SLM, our method is 1,000 times faster."

Now the team intends to implement the technique in live microscopy and endoscopy systems for testing in different biomedical imaging scenarios, as well as investigating the use of the system to focus in multimode optical fibers rather than scattering media.

"In live tissue, blood perfusion and motion constantly change the scattering medium, so focusing algorithms must operate faster than the rate of change; hence millisecond real-time focusing is needed in many applications," commented Tzang.

"Applications of this technique could also include using multimode fibers as miniature endoscopes. By enabling imaging through multimode fibers, which are thinner and more efficient than existing endoscopes, this method could open a window into previously inaccessible regions of the human body."