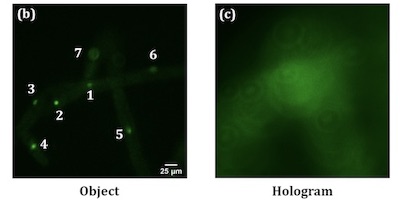 Combining quantitative phase imaging with fluorescence microscopy is known to offer potential advantages over the use of each modality on its own.

Phase imaging reveals structural information by exploiting the changes in the optical path-length of photons through a biological specimen, while fluorescence imaging provides functional details of specific molecules. A hybrid system can deliver both structural and functional information at the same time.

A project at Kobe University has now demonstrated an approach to this combination of imaging systems using off-axis holography, a route that could be particularly valuable for visualizing cells in plants. The work was reported in Nature Scientific Reports.

"This technology will form a foundation for living cell imaging, which is indispensable in the life sciences field," commented the project team, led by Kobe's Osamu Matoba. "It is also expected that using this technology to visualize stem cell processes in plants will increase our understanding of them."

The platform builds on the existing development of Fresnel incoherent correlation holography (FINCH). In this process the incident light from an object point is split into two waves with different curvatures, using an appropriate optical component, and an interference pattern is produced by the recombination of these waves at the image sensor.

FINCH is an inline holography technique, but Kobe University has now exploited the advantages of moving to an off-axis configuration, in which a small angle is maintained between the reference and object beams in the holographic system. This can have multiple benefits, including the creation of much finer holographic fringes.

"A modified FINCH configuration is accomplished by embedding a focusing lens with a diffraction grating onto a phase-mode spatial light modulator, to generate two slightly different wavefronts and propagation directions for formation of a digital hologram at the image sensor," commented the Kobe team in its published paper.

This configuration allowed the team to effectively measure both cross-sectional fluorescence imaging and the quantitative phase of fluorescent objects simultaneously.

In a field-of-view containing seven cell nuclei, only three nuclei positioned at a similar depth were in sharp focus using the conventional platform. Using its new technique, the team extracted image information from the fluorescent hologram and applied a Fresnel propagation algorithm to reconstruct images at any depth or distance. In-focus images of the multiple fluorescent nuclei were produced, restored from a single image without scanning.

Future work could now include improving the light usage efficiency, since digital holography's inherent splitting and subsequent overlap of the light can reduce the energy ultimately reaching the image sensor. Another goal is to use deep learning methods to improve the axial resolution.

Ultimately the technique may allow a deeper understanding of plant growth and assist agriculture techniques, according to the Kobe project.

"This method could be utilized to gain a diversified understanding of stem cell formation in plants, information that could then be used to control stem cells via light stimulation," commented the project. "Efficient plant reproduction and growth achieved through the proposed imaging and future stimulation could be applied to the development of a food cultivation system."