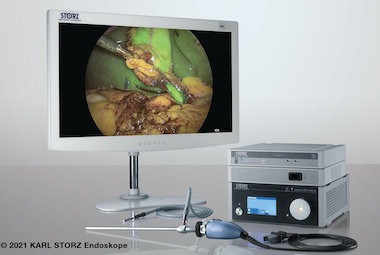 Endoscopy developer Karl Storz has released a clinical platform designed to offer surgeons an enhanced view of the tissues they are examining.

The system uses dual-4K sensors and dual-LED light technology to toggle between the white-light and fluorescence modes, said the company, in an architecture intended to combat the lag and mismatched frames that can otherwise occur.

"The new design uses a proprietary glass technology that delivers edge-to-edge clarity and eliminates the need for refocusing when switching between white light and NIR modes," according to Karl Storz product information.

A 3D viewing capability is also part of the platform, reflecting the increasing usefulness of 3D images as a way to provide surgeons with better spatial visualization of the site upon which they are operating.

The Rubina components are designed to provide clinicians with a number of set visualization options from the endoscope's NIR/ICG data. One is an overlay of the complete NIR/ICG data on top of the conventional white light image, said to be ideal for bile duct information and visualization of critical structures.

Another option is a monochromatic image, allowing clear demarcation for the assessment of perfusion and the delivery of blood to tissues. An intensity map, with colors assigned to reflect the intensity of the NIR/ICG signal, can also be generated.

The new platform represents a further step in the development of endoscopic platforms able to deliver enhanced images to users in clinically useful scenarios. In 2017 speakers at the LASER show discussed how visualization was becoming essential to achieve minimally-invasive surgery and better patient outcomes.

Multimodal scanning fiber endoscopes have been one route to achieving this result, for example by including laser-induced reflectance and fluorescence as a means to assess plaque build-up in arteries.

The new Karl Storz platform is likely to be of benefit in neurosurgery applications, where ICG fluorescence imaging is already used for skull-base surgeries and identifying critical arteries in and around tumors. However, the goal is for the new system to both enhance current endoscopy procedures and open up new avenues for surgeons.

"The clinical benefits of NIR/ICG are well established," commented Helmuth Billy, a bariatric surgeon based in California. "Rubina will be a great advantage in common procedures, such as laparoscopic cholecystectomy to remove the gall bladder. But more importantly, this may allow us to perform less invasive surgeries that would have been thought impractical before now."