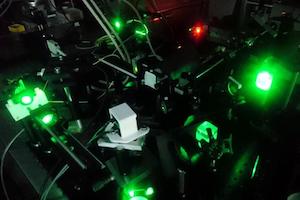 Endoscopes for medical imaging have commonly been based around coherent fiber bundles (CFB) containing several thousand optical fiber cores, along with a suitable form of lens system at the probe's tip. But these designs can be a poor fit with practical clinical use, not least because of increased size and invasiveness at the distal end caused by the lens elements.

A lens-free design would be preferable, and a number of solutions based on wavefront-shaping or phase conjugation have been investigated. Most, however, have suffered from small fields of view or provided limited visual information.

A project at TU Dresden has developed a possible answer, in which monitoring of the differential phase measurement of back-reflected light allows phase distortions arising from bending of the fibers to be compensated for in real-time, without the need for an actual lens assembly. The project's latest research on its novel design will be presented at Frontiers In Optics in September 2019.

"The lensless fiber endoscope is approximately the size of a needle, allowing it to have minimally invasive access and high-contrast imaging as well as stimulation with a robust calibration against bending or twisting of the fiber," said Juergen Czarske of TU Dresden. "The endoscope is likely to be especially useful for optogenetics, and could prove useful for monitoring cells and tissues during medical procedures as well as for technical inspections."

Traditionally, calibration of endoscopes has been a two-stage operation: first a measurement of mean phase distortion at the distal end of the instrument, and then subsequent adjustments at the proximal end during different applications.

The new design from TU Dresden incorporates a 150-micron-thick glass plate at the tip of a CFB, to act as a partial reflector. Light returned by this plate acts a programmable virtual guide star for calibration purposes. After an initial calibration in a forward direction, a differential phase measurement of the back-reflected light allows for tracking and compensating as the endoscope flexes and bends in use.

According to the team's initial research into the design in 2018, this is the first use of a guide-star-based calibration, offering a way to make direct measurements of phase distortion by digital holography without requiring distal access.

A spatial light modulator is used to manipulate the direction of the light and enable remote focusing, with the back-reflected light from the fiber bundle captured on a camera and superposed with a reference wave to measure the light's phase. This setup allows for resolutions close to the diffraction limit, while an adaptive lens and a 2-D galvanometer mirror shift the focus to enable scanning at different depths.

"Existing lensless endoscopes are tiny and enable three-dimensional imaging, but the robustness against twisting, bending and temperature changes is a challenge," Czarske commented. "Our approach to calibrating the coherent fiber bundle is based on an in-situ real-time calibration, and can be done with single sided access only."

In bench-top trials, TU Dresden's design was deployed in endoscopes of between 200 and 500 microns diameter, and proved able to deliver spatial resolutions of around one micron, sufficient for sub-cellular imaging. Focus quality was influenced by the NA of the fiber cores over short guide star-to-focus distances, and by the employed fiber aperture for larger separations; but superimposing calibrations from different guide stars might yield higher focus quality overall, according to the team.

The presentation at Frontiers In Optics will outline the project's next steps and further planned applications, including possible uses of the new endoscope design on in vivo subjects.

"We have demonstrated the novel technique in the lab and measured fluorescent beads, demonstrating that imaging in real world applications can be done," said Szarske.

"Now we plan to examine rotation and stretching of biological cells, potentially useful as mechanical biomarkers such as in the use of elasticity measurements for cancer diagnoses of blood cells. Optogenetics research including the study of neurodegenerative diseases using the device will also be investigated, and applications in patients such as imaging in the brain are being planned."