Better cameras for endoscopy and innovations such as high-resolution and 3D imaging, and augmented reality improve medical outcomes. 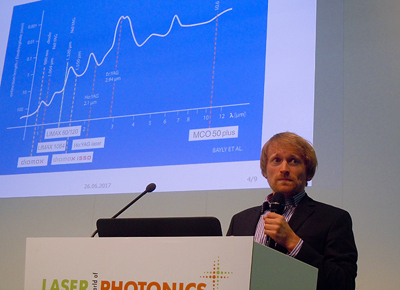 A Laser Applications Forum panel session on Photonic Based Methods in Microscopy and in modern Operation Theaters – part of the conference program at LASER World Photonics 2017 in Munich – heard a range of views and developments in new endoscopy and microscopy techniques.

The combination of lasers and more sensitive cameras has improved routine measurements in the lab to achieve higher throughputs for faster responses in various therapies, which have now entered the operating theater to achieve significant improvements in the quality in surgery.

An update on the growing medical use laser-based fluorescence microscopy beyond the diffraction limit and an overview of associated technologies and their increasing commercial implementation was given by Dr Armin Warth, of medical technology company KLS Martin.

Dr. Warth reviewed the capabilities of surgeons using mechanical tools for medical procedures in the pre-medical laser age, which he said were “basically limited to cutting, drilling and sawing methods”. He added that the use of energy-based devices such as laser surgical tools added transformation to the surgeon’s armory, meaning they could seal incisions, weld severed veins and hygienically cauterize wounds without spreading infections.

But these lasers are not easily developed – Dr Warth revealed that for a new source for a specific medical applications, it can take anything from four to seven years to take an initial idea to a production tool that gets approval from the medical regulatory authorities like the US Food & Drug Administration. 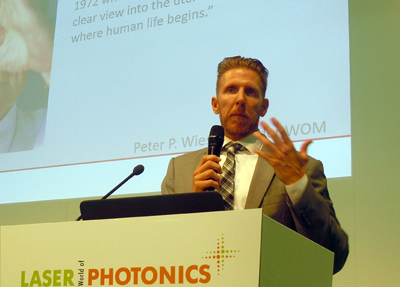 Frank Priebe of World of Medicine.

Photonics in minimally invasive medicine – past, present and future – was reviewed by Frank Priebe, of World of Medicine, a Berlin-based company that develops device technology to enable surgeons to perform procedures with only minor incisions.

”Visualization is essential to achieve minimally-invasive surgery,” he explained. Such techniques were traditionally based on endoscopy guiding surgeons but increasingly are reliant on machine vision-based robotic surgery methods. Priebe continued, “The medical device industry is dedicated to looking for ways to achieve ever better patient outcomes.”

Considering the growing value of this medical technology marketplace, Priebe presented a survey by market analysis publisher Research & Markets, which earlier this year forecast that the global endoscopy device market would be worth $42 billion, with visualization-based systems accounting for more than 22% of this total.

Asked in which directions this sector would move in over the coming years, he commented, “Surgeons already have access to ultra high definition images from flexible endoscope cameras; we are now moving towards 4K and then possibly 8K UHD images. There is also a trend towards 3D imaging of internal conditions. These developments will improve diagnosis and treatment of a range of conditions including tumors and various forms of cancer,”

He added, “Also, with so many apps and augmented reality gadgets being developed for medical purposes, it can be said that AR will play a big role in the medical field in the coming years – maybe also in minimally-invasive surgery.”