Claims and counterclaims as Acacia looks to call off Cisco merger

Maker of silicon photonics components believes it is now worth more than the $2.6BN agreed by the two firms in 2019. 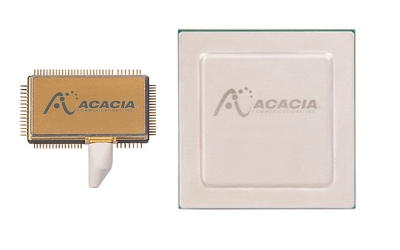 The planned merger of Cisco Systems and Acacia Communications appears to be in serious doubt, with Acacia attempting to terminate the July 2019 agreement.

Acacia, which specializes in optical communications interconnects based on silicon photonics and photonic integrated circuits (PICs), said that it was calling off the $2.6 billion deal, after an 18-month window for gaining approvals from regulatory authorities expired January 8.

The Maynard, Massachusetts, company claimed that approval from China’s State Administration for Market Regulation (SAMR) was not received within the agreed merger timeframe, meaning that it was no longer obliged to close the deal.

After a buoyant year of trading in 2020 - partly because of surging demand for bandwidth needed for remote working and socializing in response to the Covid-19 pandemic - Acacia’s executives now believe that the company is worth significantly more than it was when the Cisco deal was inked.

However, Cisco immediately disputed Acacia’s decision, announcing that it was seeking a court order in Delaware that would force Acacia to complete the transaction. Reports suggest that a “restraining order” temporarily precluding the termination has been granted, while Cisco added that on January 7 it had been notified by SAMR of the regulator's intention to approve the deal.

Acacia then fired back with its own counterclaims, saying that Cisco’s notification was based only on an email from an employee of SAMR, and that this did not in fact constitute regulatory approval.

Changing landscape
In an investor presentation that took place January 11, Acacia’s CEO Murugesan Shanmugaraj implied that with company sales growing at a compound annual growth rate exceeding 30 per cent, Acacia was now worth significantly more than it was when the $70-per-share Cisco deal was signed.

“Over the past 18 months, many things have changed for Acacia, the communications industry and the world,” Shanmugaraj said. “While some of the developments during this period, including the ongoing Covid-19 pandemic, have created significant challenges worldwide we have continued to execute against our strategic plan, and I believe we are a stronger company today than we were in 2019.”

Preliminary figures for the closing quarter of 2020 show that Acacia’s annual sales reached $581 million, up from $465 million in 2019 - with profitability also rising sharply.

Shanmugaraj explained that the company was benefiting from increased demand for coherent interconnects in hyperscale and service provider optical networks, particularly in edge and metro applications.

The CEO also highlighted the importance of the company’s pluggable 400 Gb/s modules. These are based on Acacia’s latest silicon integration technology, which it refers to as “3D siliconization”.

“We are leveraging the maturity of vertically integrated component technology to improve performance and reliability, while reducing power and cost,” said Shanmugaraj, explaining that the firm's latest products incorporated the silicon PIC with other critical elements.

“This single optoelectronic component is assembled using volume semiconductor packaging processes, making the design highly scalable and cost-effective,” the CEO added. “We believe this technology is an important next step in extracting the full benefits of silicon photonics.”

• Following Acacia’s announcement that it intended to call off the Cisco merger, the company’s stock price has jumped in value sharply. Compared with the previously agreed $70, in early trading on January 12 it had reached $85 - equivalent to a market capitalization in the region of $3.6 billion.