Earth orbit will allow study of effects of microgravity on light-activated proteins. 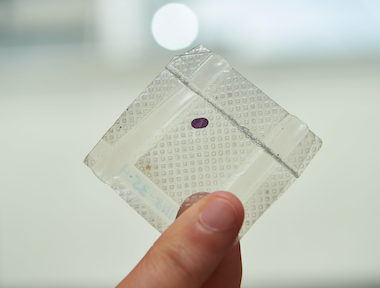 Artificial retina technology from Connecticut biotech developers LambdaVision has been flown to the International Space Station (ISS), to begin investigations into the feasibility of on-orbit production of the light-activated structures.

LambdaVision’s research on the ISS focuses on exploring the specific benefits of microgravity for manufacture of the artificial retina, expanding on investigations conducted on Earth as well as previous efforts on the ISS, according to the company, which is working alongside microgravity services specialist Space Tango.

"As we continue to grow the low-Earth orbit economy, missions such as this lend great insight into the potential uses of microgravity," said Space Tango CEO Twyman Clements.

"Space Tango is excited for our continued partnership with LambdaVision as we develop innovative production methods in space to support their novel approach to restoring meaningful vision to patients with advanced retinal degenerative diseases."

Multiple different investigations of artificial retinas and remedial biophotonics devices have been developed in recent years, exploiting a variety of developments in graphene photonics, biocompatible sensors, image processing and surgical techniques. Significant challenges in meaningful restoration of vision and delivering power to the implanted devices have remained, however.

LambdaVision has taken a different path, based on the use of bacteriorhodopsin, a light-activated protein known to be exploited by some single-cell organisms as a proton pump, capturing light energy and using it to move protons across the cell membrane and out of the cell.

"The artificial retina utilizes bacteriorhodopsin to restore functional sight to those who would otherwise be blind due to retinal degenerative diseases, including age-related macular degeneration (AMD) and retinitis pigmentosa (RP)," according to LambdaVision published data.

"By using proteins similar to the visual pigment rhodopsin that is naturally found in our eyes, LambdaVision’s protein-based artificial retina mimics the light-absorbing properties of human photoreceptors and it is capable of activating neural cells still present in degenerated retinas of blind patients."

Since the structure is powered by incident light, this approach avoids the need for an external power source or other bulky hardware on or outside the eye. It should also work for anyone impacted by retinitis pigmentosa regardless of gene-type.

The work on board the ISS is intended to assess the potential advantages of carrying out this layered manufacturing operation in a low-gravity environment, and whether it opens up opportunities for protein orientations not feasible under normal Earth-bound conditions. This research follows an initial award of $5 million from NASA to LambdaVision and Space Tango in April 2020.

"This will allow LambdaVision to evaluate the effects of microgravity on protein function and stability, which is critical for the quality and performance of the artificial retina," commented Space Tango. "Importantly, the outcomes of this experiment will provide a foundation for future ISS-based production trials. Over the next three years, the LambdaVision-Space Tango partnership will serve to evaluate and improve on-orbit production processes, and to produce artificial retinas that will then be evaluated on Earth."

The LambdaVision payload was launched on Northrop Grumman's 14th Commercial Resupply Services Mission for NASA (NG-14) to the ISS on October 3rd 2020.