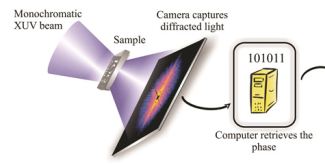 A team at Friedrich Schiller University Jena, Germany, has devised a means to push the resolution of an established lensless optical imaging method to new levels, potentially opening up fresh application areas for the technique.

Coherent diffraction imaging (CDI) involves reconstructing the image of an object by analyzing the diffraction pattern created when a highly coherent beam of photons hits the subject.

Modeling the paths that those photons have taken on the way to the detector can indicate the shape or form of the original object, and do so without a lens being involved in the operation.

"The computer does the imaging part; forget about the lens," explained Michael Zürch of Friedrich Schiller University Jena.

As with other similar methodologies, the absence of a lens means that the quality of the final image is heavily dependent upon the quality of the incident beam - which has usually been either extreme ultraviolet (EUV) photons or X-rays.

Since generation of EUV or powerful X-ray beams can be logistically challenging, researchers have for some time pursued more convenient bench-top machines able to do the same job. Although cheaper, these platforms have to date delivered less than satisfactory results, largely through an inability to produce as many photons as the more sophisticated versions.

The team at Jena tackled the problem by using a special customized ultrafast laser, able to generate extreme UV photons at a wavelength of 33 nanometers much faster than the existing tabletop systems - around one hundred times faster, according to the researchers.

More photons means a better resolution. Results due to be reported at next month's Frontiers In Optics conference in San Jose show that the researchers were able to generate an image with a resolution of 26 nanometers; almost the theoretical limit.

"Nobody has achieved such a high resolution with respect to the wavelength in the extreme ultraviolet before," commented Zürch.

Real-time imaging
Another potential issue with existing light sources has been the long exposure times that they require, making it difficult for CDI to deliver real-time feedback on rapidly changing subjects or active biological systems.

The new source has accelerated matters considerably; the Jena team says that it has reduced the exposure time to around one second, fast enough for real-time imaging in several systems of potential interest. While collecting images at this rate, the system delivered a resolution below 80 nanometers.

A combination of high-resolution and real-time imaging using a relatively small and convenient platform could allow CDI to broaden its applicability into a number of valuable scenarios.

Zürch commented that it could mean engineers are able to spot tiny defects in semiconductor chips, or help biologists zoom in on the organelles that make up a cell. Eventually the team hopes it might be able to cut down on the exposure times further, and reach even higher resolution levels.