Scotland's University of St Andrews advances laser spectroscopy to focus on spirits rather than bottles. 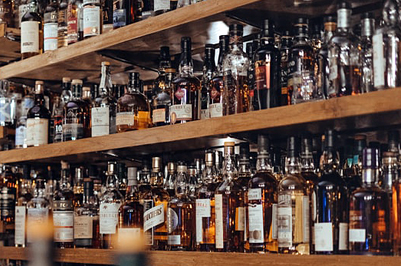 Researchers from the University of St Andrews, UK, have developed an innovative new technique using lasers to accurately measure the authenticity of some of the world’s most exclusive whiskies.

Certain bottles of whisky have been known to sell for prices over £1 million. But if you become the owner of such a whisky, how can you be confident that the contents of the bottle are the genuine product? Counterfeit drinks cost the UK economy more than £200 million in lost revenue each year, according to a 2018 study published by the European Union’s Intellectual Property Office.

New research led by scientists from St. Andrews’ School of Physics and Astronomy, published in Analytical Methods, has led to the development of a method using lasers to analyse the contents through the glass. The challenge in doing so was to record a signal from the contents without recording signals from the glass.

The method is based on laser spectroscopy, in which the wavelengths of the scattered light indicate the chemical make-up of the contents and can identify specific materials ranging from bacteria to food ingredients to specific “signature” molecules.

The researchers at St Andrews demonstrated a decade ago that laser spectroscopy could be used to identify counterfeit whisky. However, their previous method was hampered by the fact that the alcohol is not the only material to scatter light: the glass of the bottle can create an even bigger signal which dwarfs the signal produced by the contents. Therefore, previous setups required the removal of a small quantity of the liquid for testing.

The group of postdoctoral researchers, Holly Fleming, Mingzhou Chen and Graham Bruce, led by Professor Kishan Dholakia, developed a new method to accurately measure the contents of a bottle.

Rather than illuminating the bottle with a standard laser beam, the team used a glass element to produce a ring of laser light on the bottle surface and a tightly focused spot within the liquid contents.

Professor Kishan Dholakia commented, “Personally, I hate it when I have to spare a drop of whisky for validation checks. I’d much rather drink the whole bottle. Laser spectroscopy is a powerful tool for characterising the chemical make-up of many materials, but to use it to characterise alcohol in its original container in this simple way is really exciting.”

The approach does not require complex optical setups and therefore promises to be easily manufactured for widespread use, say the researchers – who have also demonstrated the verification method using vodka and gin. 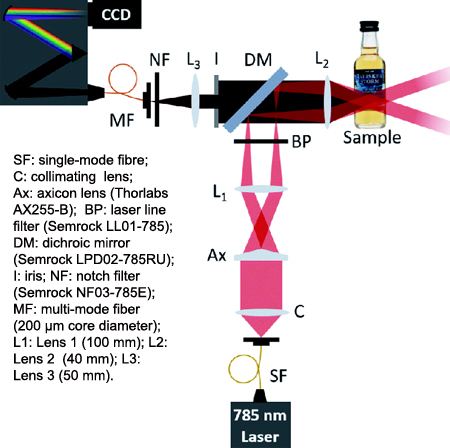 From the Analyical Methods paper: “A major component of distilled spirits is ethanol, with the content usually between 35–50% (alcohol by volume, ABV). Aside from ethanol, these spirits possess a complex chemical makeup, particularly in the case of Scotch whiskies, which mature in wooden casks, adding to flavour, colour, and aroma, collectively known as congeners.

“We have demonstrated an axicon-based system to enable Raman spectroscopic analysis of the contents of a bottle, by creating an annular beam formed on the bottle surface which refocuses inside the bottle. This significantly reduces the Raman signal contributions from the bottle.

“This method possesses the advantage of being a simple modification to a standard epi-fluorescence optical arrangement by the introduction of an axicon lens. As such, it is potentially very attractive as a simple and low cost alternative to SORS configurations, providing a way of non-destructive and non-contact detection to precisely analyse the liquid contents without opening the bottle.”