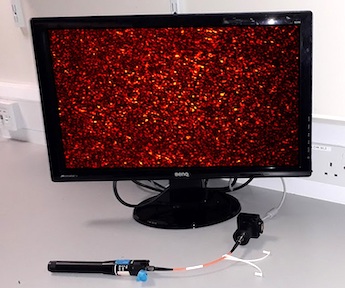 Speckle: potentially useful in a wavemeter

A breakthrough in the measurement of laser wavelength could have an impact in applications where that parameter is critical, including optical sensors and communications networks.

Researchers at the University of St Andrews have developed a device said to offer a low-cost and high-sensitivity route to measuring wavelength with unprecedented accuracy. The work was published in Optics Letters.

"Measurement of the wavelength of light using speckle is a promising tool for the realization of compact and precise wavemeters and spectrometers," commented the project team, led by Kishan Dholakia, in its published paper. "However, the resolution of these devices is limited by strong correlations between the speckle patterns produced by closely spaced wavelengths."

The project tackled this limitation by investigating how the statistical procedure termed principal component analysis could be applied to the speckle images. It demonstrated that this approach could lead to a compact wavemeter instrument, able to measure attometer-scale wavelength changes of a stabilized diode laser. This is eight orders of magnitude below the speckle correlation limit, according to the team.

"If you shine a laser pointer on a rough surface like a painted wall, or through a semi-transparent material like frosted sellotape, the laser gets scrambled into the grainy speckle pattern," commented Dholakia. "If you move the laser, or change any of its properties, the exact pattern you see will change dramatically. It's this sensitivity to change that makes speckle a good choice for measuring wavelength."

The University commented that conventional wavemeters analyze changes in wavelength using delicate, high-precision optical components, with research-quality instruments costing tens of thousands of pounds. In contrast, the St Andrews wavemeter consists of only a 20 centimeter length of optical fiber and a camera. In future, it may be made even smaller.

In 2017 the St Andrews group, in collaboration with M-Squared Lasers, announced their initial breakthrough in the use of speckle as a key to measuring wavelength.

That experimental set-up employed a 50-millimeter hollow spherical cavity as an integrating sphere, within which light was reflected multiple times. This acted as a highly sensitive interferometer, able to deliver different speckle patterns for different wavelengths of light. At the time the team said that it was able to measure wavelength changes below one femtometre, and that this could be used to assist in the active stabilization of a laser's output.

The group now intends to demonstrate the use of its new platform in quantum technology applications, as well as in the measurement of light scatter for biomedical studies.

"There is major investment both in the UK and around the world in the development of a new generation of optical and quantum technologies," commented Graham Bruce of St Andrews. "Lasers and the way we measure and control their properties are central to this development, and we believe that our approach to measuring wavelength will have an important role to play."