KEIT, a spin-out from the Science and Technology Facilities Council, is targeting industrial applications. 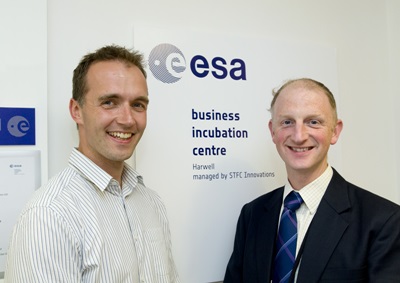 A spectrometer initially designed to measure water vapor on Mars could find widespread use back on Earth in agricultural, environmental and industrial applications, according to the team that developed the technology.

Hugh Mortimer, a research scientist at STFC’s RAL Space division, and the inventor of the novel spectrometer design, believes that the technology could be used to monitor food production and industrial gas emissions, survey volcanic ash clouds, and even give crops a health check.

A company called KEIT has been set up to commercialize an approach that, unlike conventional infrared spectrometers based on Michelson-interferometers, does not require any moving mirrors.

Instead, the KEIT spectrometer uses just three static optical components - a beamsplitter and two curved mirrors - to split and then recombine light. That produces an interference pattern that is spread across a focal plane. A detector array, positioned in the focal plane, records the interference pattern, whose Fourier-transform yields the spectrum of the incident light.

As Mortimer explains, the technology was first developed for space applications, to help minimize the size and weight of such tools:

“Mass is a real commodity on board space satellites, so we developed a very high-performance spectrometer which was also extremely stable and compact,” said the researcher. “We quickly realised that there were also some very real non-space application opportunities for this.”

“It’s the unique simplicity and stability of the spectrometer that we’ve developed here at STFC that makes it so versatile and powerful. This technology could transform how spectrometers are used, where they can be used and who uses them.” 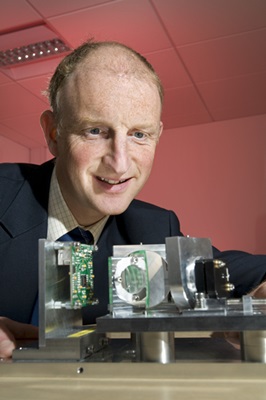 No moving parts: the KEIT kit

Vibration insensitive
Using only static components ensures that the kit is very insensitive to vibration, making it highly suited to tough industrial environments such as food or pharmaceutical production.

KEIT says that the spectrometers could be deployed to check the fat content of milk, or the origin and quality of high-value drinks such as whisky. The spectrometers could just as easily monitor gaseous emissions from industrial chimney stacks, helping industries adhere to environmental regulations.

And because of their compact design, they should be highly suited to unmanned aerial vehicles (UAVs). Civilian applications could include monitoring levels of atmospheric gases inside volcanic ash clouds, or resulting from major chemical spills.

In agriculture, it could monitor color variation in crops, assessing their health and optimizing the use of pesticides or fertilisers.

The company, which has hired Jolyon Tidmarsh as its technical director, is currently looking to expand by recruiting a development engineer with a first degree in physics and expertise in optics.

Kate Ronayne, the head of innovation at STFC and also appointed a company director, said that the spin-out was a perfect example of how cutting edge technologies developed for space could spawn commercial benefits. “I’m really excited about working with KEIT, as it grows its product portfolio to transform the way we measure and monitor materials across multiple industry sectors,” she added in a statement.

The firm has gained early funding from the Oxford-based venture investor Longwall Ventures, which specializes in technology start-ups, as well as the Rainbow Seed Fund, to support the transition towards full commercialization.

KEIT is based at the European Space Agency’s business incubator in Harwell, giving it easy access to both STFC and ESA technical expertise, and a dedicated business champion from STFC to help with business planning and guidance.