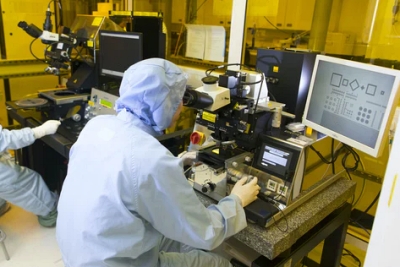 IQE, the London-listed manufacturer of compound semiconductor epiwafers for photonics and other high-technology applications, has reported a strong increase in sales in its latest financial results.

Reporting figures for the six months ending June 30, the Cardiff-headquartered firm posted sales of £89.9 million - up 35 per cent on the previous year, and better than the £85 million projected in IQE’s June trading update.

That represents a company record for the first half of the year, and reflects a bounce in demand from both the wireless communications and photonics sectors - IQE’s two key markets.

Lasers and 3D sensing demand
Photonics-related sales of £43.4 million were up 20 per cent on the same period in 2019, with IQE reporting continued growth in the relatively new market for 3D structured light sensors in smart phones.

Based around vertical cavity surface-emitting laser (VCSEL) arrays, these sensors are now finding more applications in consumer electronics, moving beyond initial facial recognition for user identification to feature in forward-facing cameras for augmented reality, and time-of-flight devices for proximity sensing.

IQE also noted strong demand for semiconductor lasers to be used in optical communications links, as well as for industrial applications. Infrared sensors for aerospace and military deployments are another growth area.

Drew Nelson, the firm’s long-standing CEO, said he was proud of the latest results, especially given the wider uncertainties presented by the Covid-19 pandemic.

“We have demonstrated both financial and operational resilience and have delivered record [first-half] revenues,” said Nelson in a prepared statement. “However, our priority has been to ensure all our colleagues are safe during this unprecedented time, and I would like to take this opportunity to thank our dedicated staff who successfully maintained operations at all of our global sites despite the challenges posed by the global pandemic.”

Stock drops despite confident outlook
The CEO and his team now say that they are confident that the momentum seen in the first half of the year will continue into the rest of 2020.

“Our business remains well-placed to capitalize on opportunities in 5G mobile network infrastructure and handsets, 3D sensing in VCSEL-based products, and a host of advanced sensing applications across a broad optical spectrum,” he said.

Despite the ongoing pandemic and anticipated global recession, IQE said it now has sufficient confidence to predict full-year revenues of £165 million - a figure that would represent full-year growth of at least 18 per cent.

• Following the update, IQE’s stock price dropped in value by around 10 per cent, possibly a knock-on effect of the wider sell-off that has seen the tech-focused Nasdaq index drop in value by approximately the same margin over the past week.

Recent days have also seen several photonics companies slide in value, following comments by the CEO of optical network systems vendor Ciena that orders for communications equipment had dropped off rapidly in the last few weeks.