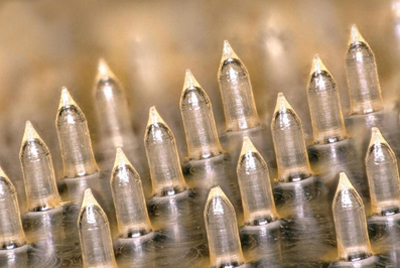 Although it is already used to treat certain skin cancers, photodynamic therapy (PDT) cannot reach the deepest lesions. But now, a new technology – the micro needle patch, developed and patented by CEA-Leti and Inserm, both based in France – is said to overcome this limitation.

Its developers say the LED-needle patch technology could reach the market “within three to five years.” The Inserm OncoThAI unit is part of Lille University Hospital and Lille University.

Skin cancers due to overexposure to the sun are rising sharply, say the scientists. The WHO has reported two to three million cases per year. These cancers are sometimes treated by local ablation therapy and PDTwas invented to avoid this comparatively extreme type of treatment.

Typically in the PDT procedure a cream is applied to the skin containing an active ingredient that attacks and destroys the tumoral cells under the effect of certain wavelengths of light.

But this technique is not efficacious against deep lesions, say the CEA-Leti and Inserm team. The partners have overcome this limitation by developing a patch with micro needles measuring between 400 µm and 750 µm in length. These needles reach the interface between the epidermis and the dermis.

”The patch and the needles, which take effect in just 1 hour of treatment, are made of a material that combines water, a pharmaceutical-grade polymer and the active ingredient,” explained Mathilde Champeau, the doctoral student in charge of the project.

”The patch is placed on the skin and exposed to light from LEDs emitting at 635 nm. It dissolves in less than 1 hour. The active ingredient is metabolized by the tumoral cells, then attacks and destroys them under the effect of the light,” she added.

While the concept of the patch may seem simple, it has taken several years to define its characteristics: the choice of polymer and active ingredient, the development of a "clean" collective manufacturing process, the spacing and shape of the needles, which must not be deformed when applied to the skin, despite their tiny size.

The small size of the needles means that the treatment is painless, which reduces patient anxiety. But the scientists add that such patients will likely have to wait for another three to five years for the clinical trials of the new patch to be completed.