University of Virginia tackles the current challenges in understanding the brain. 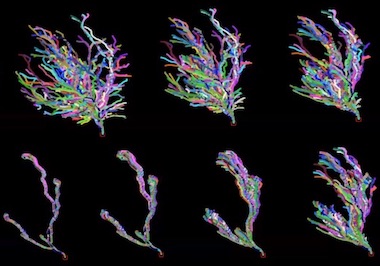 Advances in image analysis are revealing new aspects of neural behavior, while also prompting fresh questions about the detailed workings of the brain.

"Here are four of those questions, out of maybe four hundred thousand that we need to answer before unraveling the mystery of the brain," said Scott Acton of the University of Virginia and the National Science Foundation (NSF), introducing his conference presentation on Image Analysis for Neuroscience as part of SPIE Optics + Photonics Digital Forum.

"First question: does the meningeal lymphatic system play a role in Alzheimer's?"

As recently as five years ago it was not thought that the brain included a lymphatic system at all; but the discovery that it does raises possible connections between the lymph system's waste disposal function and degenerative neural diseases.

The Virginia team developed a technique - a "standard approach with a twist" commented Acton - using an image matting method to classify pixels as either foreground lymph vessels or background pixels in an image of the lymph system, and then carrying out a segmentation analysis to reveal the morphology of the vessels.

Once that is determined, the function of the vessels can be assessed. Modelling the flow of waste via the lymph in the brain has now revealed differences between waste removal in healthy and unhealthy tissues, suggesting a link between the function of the lymphatic system and Alzheimer's for the first time.

Acton's second question is how to use mapping operations to quantify the morphological difference between two neurons.

"A neuron is essentially a union of paths," said Acton. "At each point in a path we have three parameters: position in free space; concurrence, relating to the use of one point by several paths; and hierarchy, describing how many bifurcations occur above that position."

Graphing neurons using these three parameters has allowed the Virginia team to show how neurons deform elastically, an important factor in modelling the degeneration of neurons and the associated decrease in active paths.

Essential collaboration between scientists and engineers

"Our third question: what do glia do?" said Acton, referring to the resident immune cells in the brain that are in fact more abundant than neurons. "Microglia have large cell bodies and tentacles extending away, which are thought to surveil the local tissue for infection and cell death. We know something about their role in development, but less about their role in normal homeostasis."

A specialized image processing algorithm has allowed the team to generate 3D segmentation images and time-lapse videos, revealing how fast the glia move and exchange information. These prove that healthy glia look at more volume in their surveillance than infected glia do, indicating a possible connection with brain diseases.

Acton's fourth question centers on how to image living cells below the diffraction limit. The Virginia team has developed its own version of lattice light sheet microscopy (LLSM), and an accompanying convolutional neural network computation to take a first stab at differentiating image data into either cell boundaries and interiors, or background pixels. A post-processing method called LCuts then works on the first pass results and generates a reconstructed image of the cells.

"A convolutional neural network is not enough when cells are stuck together or split, and when the signal to background ratio is low," commented Acton. "Our LCuts method intelligently uses the morphology of the cells themselves to help put these pieces back together."

These innovations in imaging are key to reverse engineering the functions of the brain, but also form the foundations of several non-biophotonics innovations, from smartphones to autonomous vehicles. An understanding of neural networks is impossible without an understanding of signal imaging and data processing, said Acton, which is why signal processing projects such as those supported by the NSF are needed in both neural imaging projects and other photonics-based research fields. Extensive collaboration between scientists and engineers is also essential.

"We're on mile 2 of a 26 mile marathon," Acton concluded. "There are tons of questions to be asked and answers to be had. And success will come a little at a time."