Korean firm looks beyond LCD and OLED, with new generation of screens based on direct quantum-dot emitter layers. 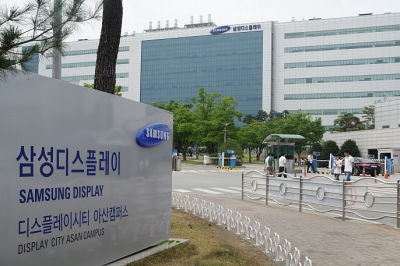 Electronics industry giant Samsung is expecting to commercialize a new generation of display technology in 3-5 years, based around the latest advances in quantum-dot (QD) emitters.

Speaking during a plenary session at the SPIE Optics + Photonics Digital Forum, Samsung Display executive VP Changhee Lee said he believed that the “QD-LED” technology would become the next big thing in the displays sector.

“We will experience a third technological revolution in the displays industry,” he predicted, with direct QD emitters following on from the prior shifts to flat-panel displays based on LCD and then organic LED approaches.

Lee also highlighted new opportunities for growth in the displays business prompted by both the Covid-19 pandemic and the emergence of 5G communications, for applications like digital healthcare and virtual education and entertainment - all of which demand superior display technology.

Hybrid approaches
While Samsung Display has been selling “QD”-branded TVs for several years, these devices are in fact based around a hybrid technology that uses QDs for color conversion but still relies on an LCD layer to produce blue light.

However, with panel prices falling dramatically amid new competition from China, Samsung Display announced in March that it would stop producing LCDs by the end of this year. Rival LG has made the same decision.

Lee told the virtual SPIE conference, normally held in San Diego each year, that Samsung Display would launch a new hybrid QD-OLED technology in 2021. However, this would still only use the QD layers for color conversion, with the blue OLED emitter layer effectively replacing the LCD element.

Beyond that, Lee and his colleagues are looking to shift to a technology using QD layers to produce higher-purity red, green, and blue light emission directly.

“QD-LEDs are ideal for displays because of their excellent efficiency, color purity, reliability, and cost-effective fabrication,” Lee said.

That color purity arises from the QDs' much narrower-linewidth light emission compared with OLEDs, yielding a higher color gamut and the appearance of more vibrant colors and brightness on the screen.

QD display production plan
Lee, who is known for his development of low-cost inkjet printing methods for organic semiconductor processing while he was at Seoul National University, outlined some of the key recent developments that have brought QD emitters towards commercialization.

While cadmium selenide (CdSe) dots are by far the easiest to fabricate and are also very efficient, environmental concerns over cadmium toxicity has driven researchers to find non-toxic alternatives.

Lee explained that indium phosphide (InP) nanocrystals confined within a combination of zinc selenide (ZnSe) and zinc sulfide (ZnS) shells for good lattice matching had shown good performance in the red and green, while InGaP and ZnSeTe variants were able to produce blue light.

While more refinement will be required, separate improvements in ligand engineering, transfer printing, and charge-transport layers mean that the QD-LED approach is advancing rapidly towards commercialization.

Last year Samsung Display showed its belief in the new technology, with the announcement of a plan to invest more than $10 billion establishing QD production facilities and related research and development by 2025.

The move involves a “step-by-step” conversion of the firm’s 8th-generation LCD line at its Asan campus into a QD production line.