Laser celebrated in London and Paris

Laser anniversary celebrations at the Royal Academy of Engineering in London and at the Palais du Louvre in Paris and École Polytechnique in Palaiseau are featuring appearances by many of the field's luminaries. SPIE is an Associated Member with next week's 50 Years of the Laser in the City of Light and a contributor to the just-completed event at the Royal Academy of Engineering. 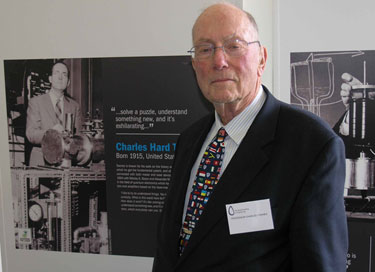 I can see myself

Charles Townes, who with Nicolai Basov and Alexander Prokhorov shared the first Nobel prize given for laser research, will be a featured speaker at both events. Townes is Professor Emeritus at the University of California, Berkeley, an SPIE Fellow, and 2010 winner of the SPIE Gold Medal of the Society.

Laser experts speaking at the Royal Academy of Engineering celebration on 17 June included Anthony Siegman (Stanford University), Colin Webb (University of Oxford), Wilson Sibbett (University of St Andrews) and David Payne (University of Southampton). A special session honored Sir Charles Kao, recipient of the 2009 Nobel Prize in physics for work in fibre optics and lasers that helped enable the internet. Kao is a recipient of the SPIE Gold Medal of the Society. 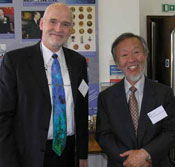 Townes, Sibbett and Kao will be among another programme of distinguished plenary presenters participating in 50 Years of the Laser in the City of Light on 22 June at the Louvre and 23 June at the Polytechnique. Pres. Nicolas Sarkozy is expected to participate as well.

Other laser luminaries on the programme are Nobel laureates Nicolaas Bloembergen (University of Arizona), Claude Cohen-Tannoudji (École Normale Supérieure), Ahmed Zewail (California Institute of Technology) and Herbert Kroemer (University of California, Santa Barbara), and other speakers, such as:

SPIE president-elect Katarina Svanberg (Lund University Hospital) and CEO Eugene Arthurs are representing the Society at the events. Photo displays developed by SPIE to honour laser luminaries and illustrate the timeline of laser development are being exhibited at both events.