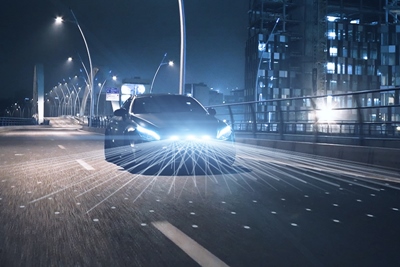 AMS, the Austrian company that specializes in high-performance sensors, has become part of a joint effort to develop solid-state lidar systems for road vehicles.

Back in 2016, ZF acquired a 40 per cent stake in Ibeo via its venture capital wing. Stefan Zommer, ZF’s CEO at the time, said that solid-state lidar, with no moving parts, represented a core technology for future automobiles with a high degree of autonomous control.

Under the terms of the new agreement, the three companies say that they will partner on a joint research and development effort to “ensure” that VCSEL-based solid-state lidar can be adopted in vehicles as early as 2021.

Superior reliability
Hamburg-based Ibeo has previously worked with BMW, mounting its “Lux Fusion” lidar scanners on the auto giant’s “Connected Drive 5” series vehicle as long ago as 2013. That car featured six lidar sensors, four at each side of the front and rear bumpers facing sideways, one below the licence plate looking forwards, and another looking backwards at the rear of the car.

But now the focus appears to have switched firmly to solid-state designs based around VCSELs. Under the terms of the new deal, AMS will provide automotive-grade VCSEL arrays and drivers that are touted as delivering superior reliability and stability compared with rival designs using either edge-emitting lasers or LEDs.

“ams [sic] is the first to market with solid-state lidar illumination solutions, meaning no mechanical parts are needed to steer the light beam direction, improving reliability while reducing complexity, size, weight, and cost,” claims the Austrian firm. “Due to the high reliability and small form factor, solid-state lidar paves the way for massive lidar deployment in the automotive segment.”

Lidar doomed?
Not everybody agrees with that sentiment, however. Tesla’s high-profile CEO Elon Musk recently described lidar as both “lame” and “doomed”, predicting that his own company's combination of high-speed image processing and AI-assisted machine vision would usurp the photonics technology.

But Musk does appear to be in the minority, and is viewed by some as projecting a dangerously over-zealous view of rival technologies that may in fact pose a wider threat to the eventual safety of autonomous vehicles. ZF, a huge automotive industry player with 2018 sales of €37 billion, seems to be firmly in the lidar camp.

Alexander Everke, CEO at the Germany-headquartered company, said: “Together with Ibeo’s leading solutions and integration capability, coupled with its deep experience in lidar, we will provide an unmatched solution for automotive manufacturers in their quest to create the mission-critical reliability required for autonomous driving.”

Aine Denari, ZF’s senior VP with responsibility for advanced driver assistance systems, added: “As a world leader in electric mobility and autonomous driving solutions for the automotive industry, our global capabilities and deep knowledge of integrated safety, motion control and digitalization bring a unique aspect in taking lidar to the next level on a global scale. This joint activity will help make autonomous driving a safe and secure reality globally.”

A typical VCSEL array provided by AMS could comprise as many as 50,000 individual emitters. And although the company concedes that key characteristics like maturity and cost still need to improve, the sheer number of emitters is said to boost overall reliability.