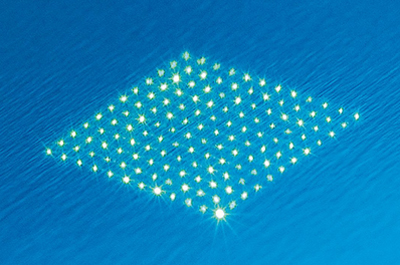 Scientists at the Fraunhofer Institute for Laser Technology (ILT) have devised a striking new addition to contact stamping technologies in the recently-completed ERDF research project “ScanCut”.

In collaboration with industry partners from North Rhine-Westphalia, Germany, the Aachen-based team of researchers at ILT developed a hybrid manufacturing process for the laser cutting of thin-walled metal strips.

The new process makes it possible to fabricate even the tiniest details of contact parts in an eco-friendly, high-precision and efficient manner, say the researchers.

Plug connectors are tiny and, at first glance, unremarkable – yet modern vehicles would be unable to function without them. Several thousand plug connectors transmit signal and control voltages from one part of the vehicle to another. These contact parts are currently produced in a traditional stamping and bending process by companies such as Kostal Kontakt Systeme, based in Lüdenscheid, Germany.

Yet the growing number of connector elements in vehicles is increasingly pushing this established mechanical method to its limits. As miniaturization continues, demand is surging for significantly smaller plug connectors with contact parts that have ever more delicate and intricate structures.

Against this backdrop, laser cutting has opened the door to design options that were previously impossible to realize, particularly when it comes to creating contact areas with several independently sprung contact points in tiny installation spaces. In these situations, the redundancy of multiple contact points enables even the smallest contact systems to provide the kind of robust electrical design that is so important for reliable signal transmission.

The researchers have also incorporated helical drilling with ultrashort pulse (USP) lasers. This patented method developed by Fraunhofer ILT has already shown itself to be an excellent option for drilling high aspect ratio precision micro-holes in steel, glass and ceramic.

Precision is one of the greatest strengths of helical drilling: the focus diameter is 25 µm, with a roughness Ra at the borehole wall of less than 0.5 µm. However, this high level of quality can only be achieved at low process speeds. 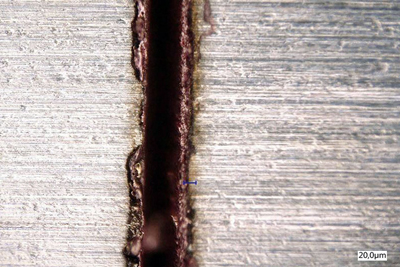 Kerf produced by helical cutting on a metal sheet.

Yet could this tried-and-tested method also be used for cutting sheet metal parts? And how could the speed of the process be increased to make it suitable for production purposes?

These were the questions that prompted the launch of ScanCut, a collaborative project involving Kostal, Fraunhofer ILT, Trumpf subsidiary Amphos and Pulsar Photonics, both based in Herzogenrath, Germany. The project was funded by the European Regional Development Fund (ERDF) and the state of North Rhine-Westphalia.

“In the project, we combined our helical drilling optics with a multi-beam module from Pulsar Photonics and a high-power beam source from Amphos,” said Jan Schnabel, scientist in the Micro and Nano Structuring group at ILT. “That allowed us to combine the precision and quality of the helical drilling process with the productivity of multi-beam processing.”

Amphos developed a high-power beam source based on InnoSlab technology, with an output power of 300 W and a pulse energy of 3 mJ. The high pulse energy is necessary to divide the laser beam into as many as 20 individual beams.

At first, however, the project partners focused on verifying whether the multi-beam method worked by splitting the laser beam into two to six separate beams. A follow-up project is now planned in which Pulsar Photonics and ILT will continue developing the helical cutting technology with a multi-beam module. The insights obtained from the project will also be used to develop high-power beam sources to expand the portfolio of products offered by Amphos.

The project partners focused in particular on the possibility of automation. “We implemented electrically adjustable mirror and optics mounts to enable automatic adjustment of the beam position,” says Schnabel. “Once we have programmed a suitable software routine, adjustments to the helical drilling optics can be initiated at the touch of a button without any of our staff having to travel to the site.”