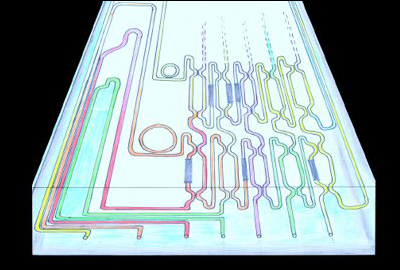 A photonic chip featuring 128 tunable components on it, is described by its developer as a “Swiss Army knife” with a variety of applications, has been developed at the University of Twente, Netherlands.

During her research on measuring light wavelengths using this photonic chip, Caterina Taballione identified another application “serendipitously”: by sending single photons through the system instead of continuous light, she discovered that the optical components can perform quantum operations; the same chip also works as a photonic quantum processor.

The chip Taballione is presenting in her thesis, comprises many components that can either split or combine light into and from separate channels. It also has ring-shaped resonators that can work as a filter. These components can be controlled externally, making the chip flexible and programmable.

Taballione added, “And all this, not just in a classical approach but also in quantum photonics, which was unexpected.” This capability has already led to the founding of a new spin-out company called QuiX.

Controlling the components is achieved by using temperature. The chip contains many Mach-Zehnder interferometers, which can split light from one into two waveguides. Before both channels are recombined, one can be modified by applying a temperature variation.

The result is that the signals in each channels are no longer identical as their phase is different. The ring-shaped components can also be temperature-controlled. In this way, Taballione has achieved a highly precise means of measuring wavelengths. For this, she links the temperature control to an artificial neural network.

The system is highly reconfigurable. This is one of the advantages for the proposed use of the chip to enable the upcoming 5G mobile standard. In this standard, wireless signals have to be directed precisely from a base station to a user. Calculating the best combination of antennas for doing this, so-called “beam forming”, is a task that the new chip could perform, rapidly and energy-efficiently, says Twente.

Taballione added, “What happens if we introduce separately detectable single photons at the inputs, instead of a continuous light source? In such a case, the components support typical quantum effects like coalescence, entanglement and superposition.”

Photons then detected at the outputs, are the result of quantum processing based on the temperature control of the components. Although a single photon light source and detector typically operate at low temperatures, the quantum processor itself operates at room temperature. 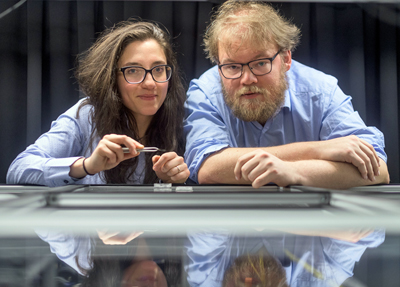 Quantum computing using photons, therefore, has an advantage over the use of ‘qubits’ only working at a temperature of a few Kelvin. This serendipitously found application, turns the chip into a powerful platform for quantum experiments, especially when the number of inputs and outputs is further enlarged, and thus the number of components.

Caterina Taballione said she had a "Eureka moment" when she read an article by Rubicon postdoc Jelmer Renema: 'He needs our Triplex technology'. With a processor on her backseat, she drove to Oxford, where Renema used it to carry out experiments. Technology and science proved to be a perfect match. The idea for the company QuiX was hatched in 2018.