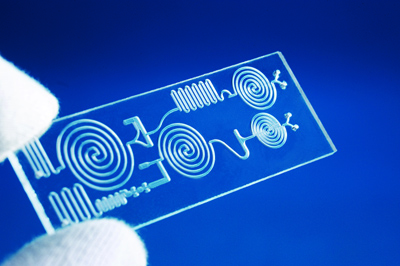 The process employs a thulium fiber laser, which they say offers a significant advantage: since plastics absorb this laser’s corresponding wavelength well, the process does not require additional absorbers such as soot. The process is suited to medical technology, so could increase flexibility and efficiency in industrial production of such pieces.

Fraunhofer ILT comments that In the life science sector, microfluidic chips have proven their worth since they can transport, mix and filter even the smallest amounts of liquid efficiently. The statement adds, “These pieces still pose a major challenge, however: the media-tight encapsulation of the microchannels integrated in the chips.

“Conventional joining technology reaches its limits in the micrometer range. In its place, absorber-free laser transmission welding – with beam sources in the near-infrared (NIR) range – allows high precision and flexibility, making it the ideal solution here.”

That is the reason why the ILT launched the SeQuLas project in 2017, together with Amtron, from Aachen, Ortmann Digitaltechnik, from Attendorn, and Bartels Mikrotechnik, from Dortmund. The project was funded under the “Produktion.NRW“ program of the LeitmarktAgentur NRW, and the acronym SeQuLas stands for “segmental quasi-simultaneous laser irradiation“.

A thulium fiber laser with an emission wavelength of 1940 nm is employed as the beam source; plastics have a natural absorption in this wavelength range. Fraunhofer ILT explained, “Since additional absorber material such as soot is not necessary, the transparency of the chip is not affected during laser processing.”

However, this form of absorber-free laser transmission welding has a problem: volume absorption creates a heat-affected zone (HAZ) that extends vertically over the entire cross-section of the component. The thermal expansion during the melting process promotes the formation of blowholes and cracks, which cause leaks in the seam structure. In addition, there is a risk that the material will warp, especially in flat components. 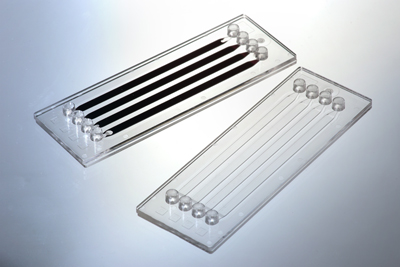 A thulium fiber laser achieves the welding of microfluidic components.

Quasi-simultaneous irradiation can reduce the heat-affected zone from expanding vertically. In this process, a laser beam is guided several times along the weld contour at high speed with the aid of a scanner system. In this way, the entire seam contour is heated simultaneously, which otherwise only melts sequentially in contour welding.

In a second step, the project partners developed a process control for the laser welding process. A pyrometer integrated in the beam path measures the temperature in the component during the welding process.

By coupling the measurement signal with the position of the scanner mirrors, they have made it possible to record the heat distribution in the component in a spatially resolved manner. In this way, thermal damage can be recorded and precisely localized during the welding process.

The newly-developed welding process can, therefore, react quickly to temperature deviations and control the laser power accordingly. In this way, homogeneous seam properties along the seam contour can be ensured.