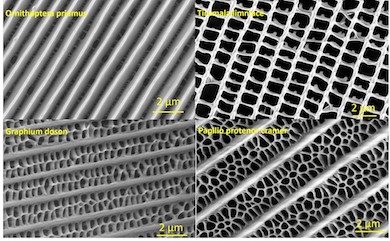 On the wing: light absorption

A project at the Nano and Molecular Systems Research Unit (NANOMO) of the University of Oulu has investigated whether solar panels bearing a surface structure modeled on that of butterfly wings offer a route to improving the cells' light-harvesting performance.

The research builds on previous NANOMO research into biomimicry as an approach to applied photonics and solar energy harvesting, along with work elsewhere on butterfly wings as a specific template for solar cells. The new findings were published in Solar Energy.

In particular the project adapted the knowledge that, although the color of butterfly wings is often a result of diffraction of natural light, butterflies with black wings can successfully harness sunlight within the wings' scales, trapping the light for purposes such as de-icing in cold weather. Inspired by such a natural light harvesting process, NANOMO examined nanostructures of black scales obtained from different butterflies and modeled their light trapping abilities when placed on Si-based solar panels.

"Even with apparently the same dark color, butterfly scales have varied nanostructures depending on their species," commented the project group. "The morphology of Ornithoptera priamus scale consists of parallel V-shaped gullies formed between two ridges and connected by thin layers. This is very different from the scale structure of three other species, Tirumala limniace, Graphium doson, and Papilio protenor, where the structures consist of round ridges spaced by arrays of 1, 2, and 3 holes."

The project used computer modelling to investigate the effects of patterns taken from wings of nine different butterfly species on the behavior of Si-based solar cells, and found that each of them led to the surface backscattering being substantially decreased.

The scale structure of Ornithoptera priamus gave the best modeled antireflection effect, with reflection decreased from more than 35 percent on bare Si panel down to a minimum of 5 percent from the model modified surface. As a result the short-circuit current, the largest current that can be obtained from the photovoltaic cell, was significantly increased. The next steps for the project will be to adapt this research into the production of silicon surfaces.

"Introducing butterfly wing structures not only reduces the light reflection and transmittance but also increases the light absorption within Si-slabs," noted the project in its published paper. "Surface reflection was decreased, and the short-circuit current was increased by 66 percent correspondingly."

Previous studies of butterfly wings as potential models for light harvesting have proven the potential for such structures to affect the properties of finished solar cells. A 2017 study by Caltech and KIT investigated the wings of a different black butterfly, Pachliopta aristolochiae, and determined that they exhibited a wide variety of hierarchical micro- and nanostructures with specific functionalities for the butterfly.

In that instance, the absorption properties were attributed to a multilevel system where the light is first collected and partly absorbed by a 2D disordered nanohole network, after which any photons that still emerged have a second chance of absorption by structures in the bottom lamina of the wing.

The Caltech/KIT team also turned its attention to potential manufacturing techniques that would allow these bio-inspired structures to be effectively and economically produced in commercial solar cells, outlining a scalable self-assembly patterning technique based on the phase separation of binary polymer mixtures.

Direct laser patterning offers alternate routes to light-harvesting modifications too, with the University of Rochester recently demonstrating for the first time how femtosecond-laser-treated tungsten surfaces can act as high-temperature absorbers for enhanced thermoelectric generation efficiency in solar applications.

The Oulu project believes that its work on bio-inspired surfaces can offer a "unique route to enhance light harvesting efficiencies on man-made solar cells. Considering the large volume of Si solar panels in use, it is foreseen that the butterfly wings can provide a major contribution to clean energy production."