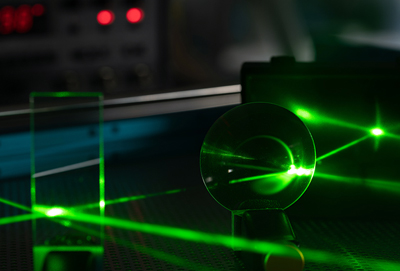 An international team of researchers has demonstrated an innovative technique for increasing the intensity of lasers. This approach, based on the compression of light pulses, would make it possible to reach a threshold intensity for what the scientists are calling a new type of physics: quantum electrodynamics phenomena. The work is described in Applied Physics Letters.

Since the invention of frequency drift amplification in 1985 by subsequent physics Nobel Laureates Donna Strickland and Gérard Mourou, laser power has increased sinficantly, to finally reach a fundamental limit in recent years. Many research groups are amplifying the energy of the laser to increase its power, but this approach is expensive and requires beams and optics that are very large, more than a metre in size.

Jean-Claude Kieffer of the Institut National de la Recherche Scientifique (INRS), Quebec, Canada, E. A. Khazanov of the Institute of Applied Physics of the Russian Academy of Sciences and Gérard Mourou, Professor Emeritus of the Ecole Polytechnique in France, decided on another direction to achieve an intensity of around 1023W/cm2: rather than increasing the energy of the laser, they decrease the pulse duration to just a few femtoseconds. This keeps the system within reasonable size limits and keeps operating costs down.

To generate the shortest possible pulse, the researchers are exploiting the effects of non-linear optics. “A laser beam is sent through an extremely thin and perfectly homogeneous glass plate. The particular behaviour of the wave inside this solid medium broadens the spectrum and allows for a shorter pulse when it is recompressed at the exit of the plate,” commented Professor Kieffer, co-author of the Applied Physics Letters study.

Installed in the Advanced Laser Light Source (ALLS) facility at INRS, the researchers limited themselves to an energy of 3 joules for a 10-fs pulse, or 300 terawatts (1012W). They are planning to repeat the experiment with an energy of 13 joules over 5 fs, or an intensity of 3 petawatts (1015W). “We would be among the first in the world to achieve this level of power with a laser that has such short pulses,” added Professor Kieffer.

Professor Gérard Mourou concluded, “If we achieve very short pulses, we enter relativistic problem classes. This is an extremely interesting direction that has the potential to take the scientific community to new horizons. It was a very nice piece of work solidifying the paramount potential of this technique.”

Optical amplifiers based on chirped pulse amplification (CPA) are used to generate high intensity pulses, a technique awarded with the above mentioned Nobel Prize in physics in 2018. In the CPA scheme, a weak temporally stretched seed pulse is amplified to high energy in a laser amplifier and finally re-compressed resulting in an ultrashort pulse of very high intensity. 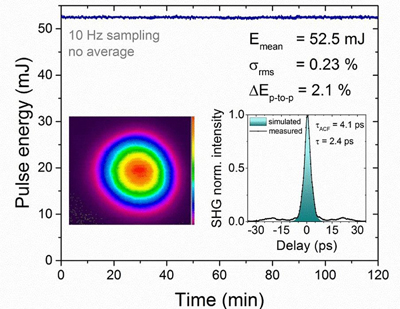 Applying this concept a new system has been developed at the Max Born Institute, Berlin, delivering few-ps pulses at 2 µm wavelength with peak power beyond 10 GW at a 1 kHz repetition rate. The emitted pulses are characterized by excellent stability and brilliant beam quality. The achievement is reported in Optics Letters.

The researchers also comment that “power-scalable ultrafast laser sources in MWIR region are needed for basic research and applications in materials processing and medicine.”

The main amplifiers of the 2 µm CPA system are based on Ho:YLF crystals and consist of a highly stable regenerative amplifier and two booster amplifiers. All of them are operated at room temperature and pumped by continuous-wave Tm:fiber lasers with a total power of 270 W.

Starting from a 2 µm supercontinuum source the seed pulses are stretched and pre-amplified and subsequently fed into the Ho:YLF amplifier chain.The re-compressed pulse energy of the Ho:YLF CPA amounts to 52.5 mJ and reveals an excellent pulse-to-pulse stability of < 0.23% rms.

The long-term pulse stability together with the beam quality, measured to be better than a M2 of 1.2, is presented in the figure, above. The emitted spectrum centered at 2050 nm with a bandwidth of 3.5 nm (FWHM) supports a ~1.7 ps Fourier-transform limited pulse duration.

After amplification, the pulses are re-compressed in a Treacy-type grating arrangement with an efficiency >93%. The recorded autocorrelation trace exhibits a FWHM of 4.1 ps. This corresponds to a duration of the main pulse of 2.4 ps (FWHM) with an estimated energy content of 85%, translating into 17 GW peak power. The latter and the pulse energy of >50 mJ represent the highest values ever achieved for few-ps pulses at 2 µm wavelength yet.

This source is currently being applied as pump in a system for the generation of few-cycle pulses around 5 µm with multi-millijoule energies. Applications in nonlinear optics, spectroscopy and materials processing are underway.