Optical system based on the design of compound eyes allows wide field of view and infinite depth of field. 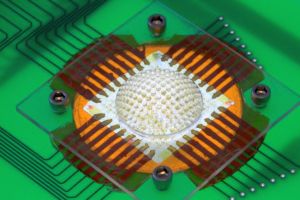 Built from curved arrays of individual imaging elements called ommatidia, rather than around a single lens and retina arrangement as found in humans, they are known to provide wide-angle fields of view and a drastically increased depth of field.

Replicating that structure in artificial cameras is not straightforward, but a team led by John Rogers of the University of Illinois at Urbana-Champaign has now built an arthropod-inspired camera using elastomeric compound optical elements and deformable arrays of thin silicon photodetectors. The work was published in the journal Nature.

As well as demonstrating similar optical behavior to that of the natural optical systems, the new design also provides a manufacturing route to the production of larger and more complex structures.

"To the best of our knowledge, ours is the first example of a scalable set of materials and fabrication processes for insect-eye-type cameras," Rogers commented to Optics.org.

Previous approaches to the challenge have included the manufacture of large-scale hand-built replicas, using separate CCD chips or photodetectors and bulk lenses in a hemispherical dome. Other attempts have tried to use planar microlens arrays mounted on CCD chips. Neither route has proved entirely successful.

"The former cannot readily scale down in dimensions or up in resolution, while the latter is unable to exploit the critical advantages associated with a hemispherical shape," said Rogers.

To overcome these hurdles, the new design is built from two main sub-systems, both initially fabricated in a planar geometry.

The optical imaging function is provided by an elastomeric array of convex microlenses molded from PDMS polymer. This sits above the photodetection system, in which silicon photodiodes arranged in a matching mesh structure at the relavant focal points are addressed with narrow polyimide-encapuslated filaments.

Once bonded together, these joined systems can then by carefully deformed into a hemispherical structure to model the design of arthropod eyes. Although straightforward in principle, designing structures that could withstand the required deformation was a significant challenge, as Rogers noted.

"Achieving hemispherical shapes while using underlying processes that exploit planar device architectures and manufacturing techniques developed for conventional CCDs and integrated circuits was a key aspect of the work," he said. "We exploited elastomeric micro-optics along with concepts in stretchable electronics and combined them with a few additional ideas, to result in a system that can be fabricated in a planar layout and then subsequently blown up like a balloon to achieve the desired 3D hemispherical configuration, in a precisely controlled manner."

The eventual structure featured 180 imaging elements, arranged in a nearly hemispherical shape of about 160 degrees. 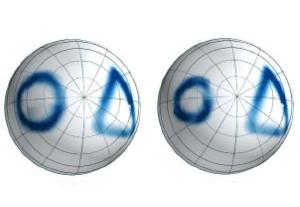 Outperforming the human eye - in some respects.

Scalable structures
The resolution of such compound structures is fundamentally limited by the number of visual elements present.

But in nature, this drawback is balanced by certain optical properties beyond the reach of the mammalian design, and the new camera has started to show how these properties could be put to practical use.

In the Nature paper, the team noted that the system enabled exceptionally wide-angle fields of view without off-axis aberrations, something difficult or impossible to obtain using planar detectors, even with sophisticated optics. Another advantage is a nearly infinite depth of field, allowing the camera to potentially image multiple objects at widely different angular positions and distances within a single field of view.

The team demonstrated that both these characteristics were available from their design, using a completed camera mounted on a circuit board to image illustrations of geometric shapes and line-art.

With a working camera system now proven to be feasible, Rogers is confident that more advanced structures can be made.

"We feel that it is straightforward to scale from where we are now, which in insect terms is comparable to the eye of a fire ant or a bark beetle, to something in the range of a dragonfly or praying mantis," he said. "And, in fact, to go further, beyond anything that is found in biology."

Key to this scalability is the use of photolithography and thin film processing in ways that can naturally be scaled down in size and up in resolution for higher numbers of ommatidia. Rogers noted that practical constraints associated with clean-room facilities and manufacturing capabilities are the factors limiting the number of ommatidia achievable at present.

Commercial applications could readily follow, perhaps replacing fisheye lenses in small aerial vehicles or medical systems, now that the principles have been established by the new design.

One early adopter could be MC10, a company set-up to exploit the advances in stretchable electronics made by Rogers since 2008, and hence now in a position to move some of the concepts underlying the new camera into the real world. Rogers commented that the extent to which MC10 is successful in doing so for its particular target markets in health monitors and surgical tools could directly benefit commercialization efforts around the new types of cameras.

"The scalable concepts and materials can be transferred to commercial manufacturing, and we are quite interested in moving in that direction," he said. "But at the same time we feel that there are some important and interesting additional things to do at the base technology level."