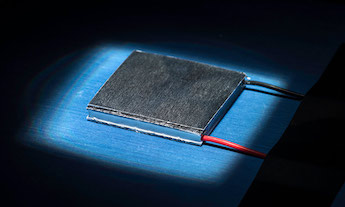 Direct laser processing of material surfaces is a powerful technique for modifying the optical and electrical properties of those materials, often through the creation of nanostructures on the surface.

The precise control of those surface modifications, and hence of the material's modified properties, has remained challenging, largely due to the element of random chance that influences the size and geometry of the small-scale-structures themselves.

Femtosecond lasers have offered a route to greater control over the operation, and to the creation of structures having sub-wavelength periodicity. But the ability to precisely design the resulting surface properties has remained elusive.

A project at the University of Rochester has now demonstrated a new way to influence the morphology of surface nanostructures, and hence the spectral light absorption of a treated metal. The work was reported in Light, Science & Applications.

The breakthrough could be directly useful in thermal-solar devices, boosting the efficiency of tungsten-based absorbers and improving their thermoelectric generation performance compared to untreated tungsten surfaces.

"This surface not only enhances the energy absorption from sunlight, but also reduces heat dissipation at other wavelengths, in effect making a perfect metallic solar absorber for the first time,” commented Rochester's Chunlei Guo.

Nanostructures affect the absorption spectral range of a metallic surface through a complex process involving resonance modes created between the individual structures, and the behavior of surface plasmons - delocalized electron oscillations that can exist on a material's surface under the right conditions.

In trials, the project used a Ti:sapphire 800-nanometer laser delivering 30-femtosecond pulses to modify the surfaces of copper, aluminium, steel and tungsten, and found that the treated materials could indeed became broadband light absorbers and selective solar absorbers (SSAs), depending on the treatment parameters.

"For solar-thermal applications, tungsten-based SSA has the highest solar absorption efficiency," noted the team in its published paper. "Comparing the performance of untreated tungsten (W), commonly used as a solar absorber, and fs-laser-treated W as a receiver for a solar thermoelectric generator showed that treated W-SSA provides a 130 percent increase in the thermoelectric generation efficiency."

This is the first time that femtosecond-laser-treated surfaces have been able to act as high-temperature absorbers for enhanced thermoelectric generation efficiency, according to the Rochester team.

In a further experiment, the team used femtosecond-laser-pulses to create an array of nano- and micro-scale structures on the surface of a regular tungsten filament, enabling a light bulb to glow more brightly at the same energy usage.

"We fired the laser beam right through the glass of the bulb and altered a patch on the filament," said Guo. "When we lit the bulb, we could actually see this one patch was clearly brighter than the rest of the filament."