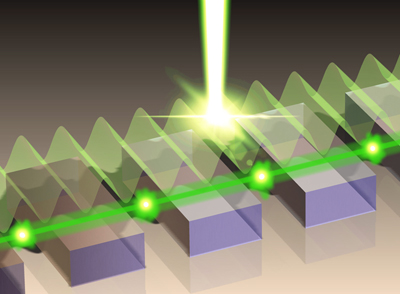 In recent years, terahertz lasers have been the focus of intense study due to their ability to penetrate packaging or other surrounding materials to detect chemicals of interest or imaging biological tissue without damage. Fulfilling terahertz lasers' potential for us hinges on improving their intensity and brightness.

Sushil Kumar, associate professor in the Department of Electrical and Computer Engineering at Lehigh University, Bethlehem, PA, and his research team are working to improve terahertz semiconductor quantum-cascade lasers. In 2018, Kumar, who is also affiliated with Lehigh's Center for Photonics and Nanoelectronics reported in Nature Communications on a simple yet effective technique to enhance the power output of single-mode THz lasers based on a new type of distributed-feedback mechanism.

The work was performed by graduate students, including Yuan Jin, supervised by Kumar and in collaboration with Sandia National Laboratories.

Now, Kumar, Jin and John L. Reno of Sandia are reporting a new terahertz technology breakthrough: they have developed a new phase-locking technique for plasmonic lasers and say they have achieved what they are calling “a record-high power output for terahertz lasers.” The group's latest laser has produced the highest radiative efficiency for any single-wavelength semiconductor quantum cascade laser. These results are described in Optica.

"Our paper describes a new phase-locking scheme for plasmonic lasers that is distinctly different from prior research on phase-locked lasers," said Jin. "The demonstrated method makes use of traveling surface waves of electromagnetic radiation as a tool for phase-locking of plasmonic optical cavities. The efficacy of the method is demonstrated by achieving record-high output power for terahertz lasers that has been increased by an order of magnitude compared to prior work."

Traveling surface waves that propagate along the metal layer of the cavities, but outside in the surrounding medium of the cavities rather than inside, is a unique method that has been developed in Kumar's group in recent years and one that continues to open new avenues for further innovation. The team expects that the output power level of their lasers could lead to collaborations between laser researchers and application scientists toward development of terahertz spectroscopy and sensing platforms based on these lasers.