Research group already known for its lab-on-a-cell-phone work is developing the lens-free equivalent of an X-ray CT scan. 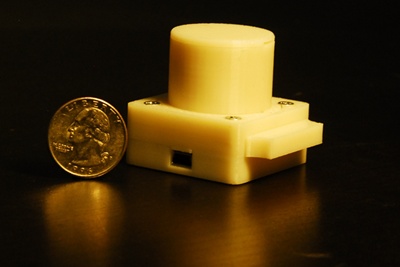 An applied photonics research team at the University of California, Los Angeles (UCLA) has demonstrated a lens-free approach to chip-scale optical tomography for the first time.

Although in the early stages of development, the team says that the technology is suited to mass production, and could lead to very cheap diagnostic tools for widespread use in the developing world.

He described the technique, which requires only low-cost LED sources, as the “optical analog of an [X-ray] computed tomography (CT) scan”.

By rotating the light source, it is possible to generate a three-dimensional image by illuminating a sample over a wide angular range, effectively allowing optical sectioning without the need for any lenses. Uniquely, the approach combines a wide on-chip imaging volume (of around 15 mm3) with a lateral resolution of less than a micron, and an axial resolution of less than 3 microns.

The approach uses a number of LEDs to provide a partially coherent light source, which is placed about 7 cm from a CMOS sensor array - with the sample placed directly on the sensor. As the light source is rotated, the system records holograms at each illumination angle, and these holograms are then digitally re-constructed and back-projected to compute tomograms of the sample.

Isikman did note some weaknesses with the current approach, including that it is not currently possible to fully rotate the source to 90°, largely because of limitations with light detection at such extreme angles. At the moment, the maximum rotation possible is plus/minus 50°.

Lab-on-a-cell-phone
The UCLA group is already well-known for its development of lens-free holographic microscopy – with the technology dubbed a “lab-on-a cell phone”. Using the portable, USB-powered “lab”, which has sub-micron-scale resolution, it is possible to identify water-borne parasites and the presence of malaria.

In other recent work, Isikman and his colleagues have combined lens-free holography with optofluidics, which they call “optofluidic tomography on a chip”. They have demonstrated the proof of concept by tomographic imaging of the bacterium C. elegans (see Quicktime video showing optical sectioning of a C. elegans worm).

Part of the UCLA group’s vision is to develop a field-portable, lens-free tomographic microscope that would form part of a set of low-cost but highly effective optical tools for diagnostic use in the developing world, where millions of deaths each year from diseases such as malaria and tuberculosis could be dramatically reduced through more effective diagnosis and intervention.

The lens-free tomography tool could in principle be used for rapid disease diagnosis and parasite identification in the field, in place of a x40 magnification microscope in a remote laboratory. But the approach may also find use in cell and developmental biology, because of its high-throughput capability.

Under the direction of associate professor Aydogan Ozcan, the group has previously won sponsorship through the Bill & Melinda Gates Foundation, while Ozcan has won numerous awards for his work from SPIE, The Optical Society, National Geographic and others. He holds a number of patents covering optical technologies and is also in the early stages of setting up a spin-out company called “Microskia” to develop the technology pioneered at UCLA on a commercial basis.