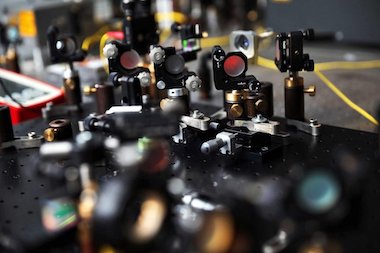 A team at the University of Auckland has employed detection technology borrowed from quantum optics to carry out optical coherence tomography (OCT) at much lower light power levels than is usually the case.

This could allow OCT to be safely applied to fragile tissues and organs which may previously have been damaged by the illumination powers needed. The research was published in Optics Letters.

"For clinical applications, being able to perform OCT with low light power is crucial because safety standards limit the light intensity levels that can be used," said team leader Sylwia Kolenderska. "In some cases, these power levels are not high enough to achieve good image quality."

The project's breakthrough involved adopting a detection scheme used in quantum optics, usually to provide information about spectral correlations of photons, and applying it to a standard spectral domain OCT system.

According to the team's published paper, this detection scheme is based on the concept of dispersive Fourier transformation, an approach that has already been used to time-stretch light in an OCT operation as a means of approaching swept-source behavior.

The Auckland team developed this approach further by using a fiber spool to induce a wavelength-dependent time delay, which is then measured by a single-pixel detector, in this case a superconducting single-photon detector (SSPD).

This approach effectively uses a fiber instead of a grating to separate different colors, which each travel at different speeds down the fiber, effectively achieving the wavelength discrimination upon which OCT relies. The SSPD then captures the output from the fiber, allowing the light spectrum to be acquired for reconstructing OCT images.

High-detail images from a tiny amount of light

Using this set-up allowed the group to achieve good image quality with power levels "up to 1 million times lower than those currently used in OCT instruments," according to the project.

"Because SSPDs can detect single photons, an OCT instrument using them requires only a tiny amount of light compared to what is currently used in modern OCT machines," commented Kolenderska. "Yet, it still produces high-detail images that are comparable with existing OCT systems."

In trials, the platform was operated at 1550 nanometers and used to image a stack of quartz and sapphire glasses 50 to 500 microns thick, along with a sample of onion tissue.

The onion sample presented a significantly greater challenge to the project's computational algorithms than the glass stack, according to the team, which noticed a number of self-interference signals appearing in the results.

Even so, the resulting image quality was said to be comparable to that obtained with standard OCT systems with similar axial resolution and imaging range characteristics. The issue of self-interference artifacts, a consequence of the sensitive detection scheme recording all kinds of interactions between photons, not just the ones needed to reconstruct an actual image, will be addressed by the project in future work.

"Our results show that the new detection approach could allow quality OCT imaging of different parts of the body, especially sensitive organs such as the eyes, without worrying about going above the safety levels in terms of light power," said Kolenderska. "In fact, the SSPD would be damaged beyond repair long before even 1-percent of the safety level is reached."