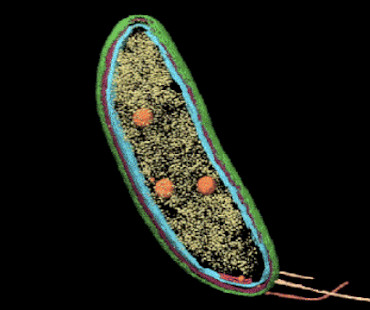 Best of both techniques: proteins revealed

A technique combining super-resolution fluorescence microscopy and cryogenic electron tomography (CET) could help reveal the locations of individual proteins within the context of bacterial cells, potentially answering fundamental questions about how proteins work together.

Developed at Stanford University and named correlated imaging by annotation with single molecules (CIASM), the technique could ultimately add to an understanding of the molecular machinery involved in viruses, parasites, and processes like photosynthesis. The findings were published in PNAS.

"This is a big leap for biology, and I think there are many, many systems that will benefit from this kind of imaging," said Stanford University's Lucy Shapiro.

Both super-resolution fluorescence imaging and CET are capable of revealing the subcellular organization of biomolecules, and both have specific strengths and weaknesses.

The family of super-resolution techniques has been the subject of considerable research efforts in recent years, leading to the award of the 2014 Nobel prize in chemistry to three of the technique's pioneers, including Stanford's William Moerner. A number of variant techniques have been developed to improve resolution and limit the potential damage from the high irradiation energies that can be involved.

CET provides a more static image than standard fluorescent microscopy, but can be capable of high resolution. It involves freezing a sample to preserve its structure, and imaging a target region via transmission electron microscopy from multiple angles. A 3D volume can be computed from the projections, although labeling the specific biomolecules of interest with suitable electron-dense markers has been challenging.

A combination of the nonivasive and specific labels of super-resolution imaging with the resolution of CET could now enable the visualization of biomolecules of interest within their own cellular neighborhood.

See how the photosynthetic machinery operates

Putting the two techniques together required the team to address ways of achieving super-resolution fluorescence imaging at cryogenic temperatures.

The successful approach built on a super-resolution technique developed by William Moerner's Stanford group called single-molecule active-control microscopy (SMACM), in which "structures labeled by an ensemble of photoactivatable fluorophores too dense to be imaged simultaneously are resolved over repeated cycles, in each of which only a subset of the fluorophores is activated."

To carry out SMACM at cryogenic temperatures, where the limited thermal energy affects the emissive states of fluorophores, the project identified fluorescent proteins known to remain photoactive in frozen samples. It employed them to image proteins in C. crescentus bacteria, investigating how two specific proteins influence the ability of this bacteria to divide into two distinct forms of daughter cell.

The combined images revealed exactly how the two proteins were arranged, and that one of them was embedded in the cell’s inner membrane and protruded into the cell’s interior, an arrangement thought to be key to the bacteria's behavior during division.

In a separate, parallel study, published recently in Angewandte Chemie, the researchers applied the technique to examination of single quantum dots, to see how the finer structural details of individual dots were related to specific details of their optical properties.

"We were able to see some surprising behaviors of the individual quantum dots, for instance in their response to excitation with laser light," said Stanford's Davis Perez. “But the most exciting aspect is that the method we developed to study quantum dots can also be used to study biological systems such as photosynthetic proteins, where energy is transferred between groups of proteins, and see how the photosynthetic machinery operates."

The project believes that the complementary attributes of SMACM and CET make the new method useful for highlighting the large number of cellular protein complexes that cannot be directly discerned in CET alone, due to either their small size or lack of periodic structure.

"Every method has its advantages and disadvantages,“ Moerner said. "This is a nice situation where we can combine two methods to learn more."