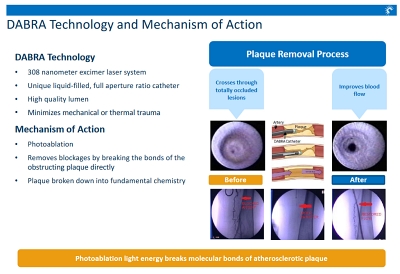 The firm says that the additional cash will be used for various corporate purposes - including support for a clinical trial, further engineering developments, and plans for a commercial relaunch.

Earlier this month the Carlsbad-headquartered firm posted a net loss of nearly $8 million on revenues of only $1.4 milion in the opening quarter of the year. As of March 31, it held around $23 million in cash and equivalent assets on its balance sheet.

Ra Medical has also recently entered into a $2 million loan agreement, under the US coronavirus aid and relief scheme for businesses adversely impacted by the global pandemic.

New CEO faces multiple issues
The various financial developments come just a couple of months after the company appointed Will McGuire as its new CEO. McGuire was previously the CEO at Second Sight, the Los Angeles company working on visual prosthetics designed to restore a basic level of vision to blind people.

McGuire was hired following the departure of Ra Medical’s two co-founders last year, namely the previous CEO, Dean Irwin, and Melissa Burstein. Back in October 2018, Irwin had led an initial public offering of stock that generated net proceeds of $68 million for the firm.

However, much of that cash has now been spent - Ra Medical’s latest filings indicate a cash burn of $33 million in 2019 - while the company’s stock price has collapsed in value.

In the past couple of weeks the stock has been trading at less than $1, prompting a standard warning notice from the New York Stock Exchange.

There are other significant issues beside the stock price. In late 2019 the company revealed that it was facing a criminal investigation by the US Department of Justice (DOJ), alongside a DOJ civil case, a Securities & Exchange Commission (SEC) probe, a class-action lawsuit, and technical problems with catheters used during PAD treatment. 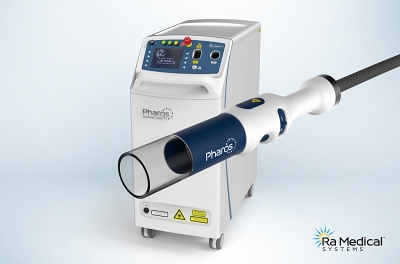 308 nm laser
The systems developed by Ra Medical, which are aimed at dermatology as well as vascular treatments, are all based around a 308 nm excimer laser.

For treating PAD, the idea is that the laser photo-ablates blockages in arteries reducing the flow of oxygenated blood to the lower leg and feet, breaking down the plaques that cause the blockages.

The approach is seen as a less invasive alternative to either bypass surgery or interventions with a stent (angioplasty), and has been trialled on 64 patients as part of a multi-site pivotal study in the US and Mexico.

With as many as 17 million people in the US thought to be suffering from PAD but less than a third of those receiving active treatment, Ra Medical has identified a potential annual market worth more than $1 billion for its laser-based approach.

Commenting after the latest financial results but prior to the stock offering, McGuire said: “I am impressed with the progress Ra Medical has made over these last few months to improve product performance and quality. The team has remained motivated and dedicated to achieving our goals through some very difficult circumstances.

“I am looking forward to leveraging my years of operating and executive experience in the medical device industry to lead Ra Medical through the challenges ahead and capitalize on the exciting opportunities in the peripheral vascular and dermatology businesses.”