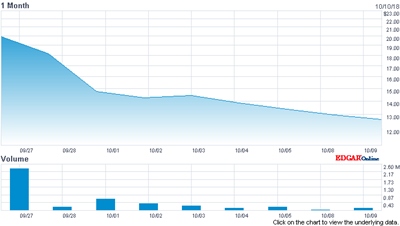 Following a successful initial public offering (IPO) in late September, the stock price of Ra Medical Systems has subsequently slumped in value by 40 per cent.

According to an October 1 filing with the US Securities & Exchange Commission (SEC), that flotation netted Ra Medical $67.6 million. In the immediate aftermath of the IPO, the company’s stock price - traded under the ticker symbol “RMED” - rose in value, peaking at $22 on its first day of trading.

But amid wider pressure on global stock markets since then, its valuation has tracked down consistently, and closed at $12.70 on October 9. In the interim, Ra Medical’s management team has filed details of a stock incentive plan for employees, although that did not appear to have any major bearing on the stock price when published.

Sales drive
The Carlsbad firm says that it plans to use a significant chunk of the proceeds of the IPO to invest in a sales and marketing effort related to its “DABRA” (Destruction of Arteriosclerotic Blockages by Laser Radiation Ablation) approach to clearing blocked arteries. Such occlusions reduce blood flow into the legs of PAD sufferers, who are at significantly greater risk of dying from heart attacks or strokes. Ra Medical currently has 15 sales reps based in the US, and will now look to expand that resource.

As of the end of June this year, 31 of its excimer laser systems had been installed in the US for DABRA, where the Food & Drug Administration (FDA) has cleared the tool for treating some patients with PAD.

However, and as Ra Medical pointed out in its IPO prospectus, DABRA is not yet fully cleared for atherectomy procedures, and the company believes it will need to complete further clinical studies before this is achieved – something that the IPO proceeds will also be used to support.

Nevertheless, states the firm, third party health payers can reimburse a procedure performed by a device which is not cleared or approved for a specific indication or procedure, if the physician determines the device and procedure are medically appropriate for a particular patient.

“Payers and the medical community can take a broader view than [the] FDA in recognizing the scope of appropriate device use,” states Ra Medical in the prospectus. “We currently intend to pursue expanded indications for use for DABRA to include an atherectomy indication for use, which FDA currently defines to include a pre-specified improvement in luminal patency, or a pre-specified increase in the openness of the artery at a pre-defined time point, and an indication for use for the treatment of in-stent restenosis.”

Rival system
To satisfy the FDA’s data requirements to support an atherectomy indication, a new clinical study would need to demonstrate an acceptable level of openness of the treated artery at a pre-defined time point, for example six months following a DABRA procedure, using ultrasound assessment or similar.

Meanwhile, the company adds that it will pursue more applications – for example to treat coronary artery disease (i.e. vascular blockages in the heart, as opposed to the legs).

Ra Medical also now faces additional competition from the Israeli company Eximo Medical. The FDA has just approved its laser atherectomy system for treating PAD, following trials in both the US and Europe that are said to have showed no significant adverse effects.

Eximo’s “B-Laser” product is based around a 355 nm wavelength source, which the company claims to provide certain advantages over the shorter-wavelength excimer system developed by Ra Medical.