Nobel win confirms importance of methods to image beyond the diffraction limit. 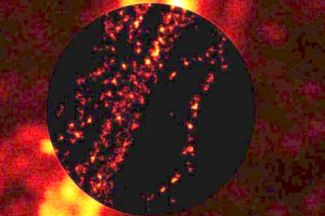 Beyond the limit: STED sees in greater detail

The 2014 Nobel prize for chemistry awarded to Stefan Hell, Eric Betzig and William Moerner testifies to the appeal and versatility of methods now available to tease microscopes into seeing beyond the diffraction limit.

Hell's work laid the foundations of stimulated emission depletion (STED) microscopy, the first method to successfully confound an equation drafted by Ernst Abbe in 1873. Betzig and Moerner worked on a related technique, known as single-molecule microscopy.

All three managed to outmaneuver Abbe's discovery that the resolution of an optical microscope would be constrained by a relationship between the wavelength of the light and the numerical aperture of the microscope. In practice, seeing features of 200 nm or so was about as good as you could get - not enough to see very far into the inside of biological cells, for example. STED changed all that.

Hell's technique, originally conceived in 1994 and shown to be a practical proposition in 1999, was a refinement of fluorescence microscopy, built on principles that have proven to be remarkably adaptable.

A normal fluorescence technique involves scanning a laser spot across a sample to excite fluorescent markers or fluorophores present, and cause them to reveal themselves - inherently a diffraction-limited operation. Hell arranged for a synchronized second laser of carefully chosen wavelength, known as the STED beam, to also illuminate the sample very shortly after the first; but the STED beam has a ring-shaped profile, complete with unilluminated hole in the middle.

Fluorophores preparing to emit their fluorescence under the influence of the original laser are quenched by the STED beam; unable to do what comes naturally, any photons they emit are artificially red-shifted in wavelength, a shift that allows those photons to be safely spotted and ignored. The more power supplied by the STED beam, the more the primary fluorescence tails off.

But at the central unilluminated hole, where no such quenching occurs, structures can still fluoresce normally. As the intensity of the STED beam increases, the quenching becomes ever more complete at the periphery of the hole, and the still-fluorescing space at the center becomes smaller and smaller. Eventually this area is narrowed down so far that it is smaller than the Abbe limit, and yet structures fluorescing there are still resolvable.

Developers were quick to realize the versatility of the process, and new adaptations of the basic principle continue to be unveiled. Recent STED milestones have included work on improving the technique's ability to image in three-dimensions, such as the work demonstrated earlier in 2014 by a group including the University of Oxford.

Speaking to Optics.org at the time, Oxford's Martin Booth commented that the goal was to address "the inherent sensitivity of STED to aberrations when used in its 3D mode, a constraint which has made it more difficult to use the technique on relatively thick specimens."

PALM, STORM and beyond
In the commercial arena, developers such as Leica have been active supporters since introducing STED as a microscopy technique. Leica recently unveiled a new pulsed STED laser for its Leica TCS SP8 STED 3X platform, intended to assist in achieving sub-30 nm resolution. The 775 nm source is supplied by Onefive, Zurich-based specialists in ultrafast lasers, under an exclusive supply deal.

Another participant has been Carl Zeiss, which markets a number of super-resolution platforms; evidence of the real-world value attached to the sector by vendors in applied microscopy. 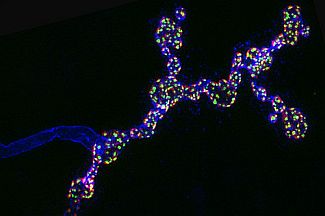 PALM, or photo-activated localization microscopy, is one such approach, and a technique in which Eric Betzig played a key developmental role.

Zeiss employs PALM in imaging systems such as its ELYRA module, said to be able to produce images with a lateral resolution of 20-30 nm and an axial resolution of 50-80 nm. This should allow researchers to capture highly resolved structures of a whole cell in three dimensional detail, and to do so in just one shot.

Both PALM and a related technique called STORM (stochastic optical reconstruction microscopy) are super-resolution methods based around wide-field fluorescence microscopy, rather than a spot-scanning confocal approach.

Unlike STED, these methods achieve high resolution by applying a low-power activation laser, ensuring that any particular molecule has only a finite chance of being photoactivated, while the bulk of the population remains unaffected. Multiple applications of the fluorescence probe builds up a map of the active species' distribution, including ones spaced so closely together that they would fall within the same diffraction-limited volume and be unresolvable otherwise.

The relatively gentle photo-excitation provided by PALM and STORM also ensures that as little damage as possible is done to the fragile interior structures of a cell when under observation, and allows samples to be observed over longer periods of time.

Building on the foundations of PALM and STORM, SDSI brings a spinning disk confocal microscope into the mix, selectively illuminating a focal plane with thousands of pinholes and effectively removing any out-of-focus light.

As noted by Blizard's Ann Wheeler while discussing the technique with Optics.org earlier this year, the SDSI approach could combat the inherent difficulties faced by PALM and STORM when attempting to examine structures deep inside the tissues under study; it could potentially even see all the way to a cell's nucleus.

"Biologists are interested in certain questions that could not be addressed by the super-resolution techniques that we have," Wheeler commented. "Super-resolution microscopy is still developing, and the field is very much going places."