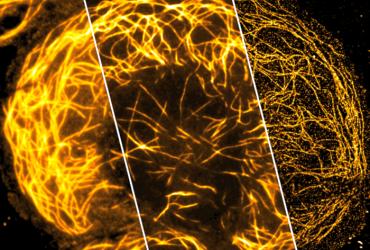 A new optical chip developed by Bielefeld University and the University of Tromsø - The Arctic University of Norway (UiT) could help platforms based around conventional microscopy achieve performance levels approaching those of super-resolution systems, offering an alternative to the complexity and expense of most current nanoscopy techniques.

The chip's developers believe that it could ultimately allow a much broader use of nanoscopy, both in scientific research and other, more everyday, applications.

"A new chip-based super-resolution technique is a paradigm shift in microscopy," commented Mark Schüttpelz of Bielefeld University. The research was published in Nature Photonics.

According to the project team, the breakthrough centers on a reversal of the normal architecture for current nanoscopy methods. These usually employ a complex microscope for imaging and a simple glass slide to hold the sample, but the new technique uses a complex - although mass-producible - optical chip to both host the sample and provide a waveguide for the illumination source, while a standard low-cost microscope acquires the super-resolution images.

The waveguides themselves are designed and constructed so as to create an evanescent field strong enough for both single-molecule switching and fluorescence excitation, enabling single-molecule localization microscopy to be carried out on the chip itself.

Live-cell imaging
In use, the chip-based design separates the illumination and detection light paths, making total-internal-reflection fluorescence excitation possible over a large field-of-view. The team demonstrated a field-of-view of up to 0.5 x 0.5 mm in its Nature Photonics paper.

One application area where the chip could make a substantial impact is in the imaging of live cells and the study of biological systems. The project has already carried out multi-color chip-based nanoscopy of sinusoidal endothelial cells taken from the liver, aiming in particular to examine transcellular pores called fenestrae. Each fenestra typically has diameters ranging from 50 to 200 nanometers, making examination difficult without applying a super-resolution technique to the task.

"Whereas the images that can be obtained simultaneously with established nanoscopy techniques range from only parts of cells up to just a few cells, the use of photonic chips now makes it possible to visualize more than 50 cells in one super-resolution image," commented the project team.

Efforts to reduce the complexity and associated cost of super-resolution techniques and bring them within reach of a wider spectrum of applications are now gathering pace. Recent examples include the DNA-PAINT technology developed by Ultivue, a reagent-based approach using short complementary DNA strands to allow single-molecule localization in fluorescence microscopy.

Elsewhere, scientific camera specialist Photometrics and Netherlands-based microscopy start-up Confocal.nl have collaborated on a system intended to balance low cost with useful sub-diffraction-limit resolution, for researchers wanting to use super-resolution techniques on limited resources. This technique is based on optical manipulation and also targeted towards live-cell applications, with wide field-of-view again a particular goal for that application.