Robot-assisted surgery is a boon for clinicians and patients, but incorporation of bioimaging is at an early stage. 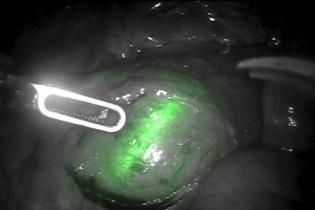 First do no harm: fluorescence shows the way

Speaking to his audience at the BiOS Hot Topics session at Photonics West in San Francisco last month, Jonathan Sorger of Intuitive Surgical outlined how the increasing use of robotic-assisted surgery represents both a challenge and an opportunity for developers of bioimaging technology.

"Half a million procedures using surgical robotic platforms were carried out in 2012, which is a big jump from the one or two thousand per year of a decade ago," he said. "But that is a drop in the bucket compared to the 240 million surgeries carried out in total. Surgical robotics is not going away; it is proliferating, and there would seem to be a huge opportunity for the technology to take advantage of advances in photonics."

The fundamental appeal of robotic platforms to clinicians is that they can allow surgical procedures to be less invasive and help to reduce subsequent surgical morbidity. Open chest procedures and abdominal operations, which typically require incisions large enough for a surgeon to get their hands into, can be performed using robotic systems entering instead through a few small portholes in the patient's body. Intuitive Surgical, based in California, markets the da Vinci system that allows surgeons to carry out heart-valve and cancer surgeries through 0.5 to 2 cm incisions.

In turn, the minimally invasive nature of robotically-assisted surgery brings a host of clinical benefits, including reductions in bleeding, fewer infections, and shorter hospital stay.

The question posed by Sorger was: "How can we use optics technologies to make this scenario even better? Can optics assist surgeons further in deciding what to cut and what not to cut, and provide additional important clinical information such as monitoring tissue oxygenation? If the technologies can work together, robotic platforms with on-board optical technologies could combine diagnosis, tissue characterization and treatment into existing clinical workflows, without disruption."

The exact development process by which this could happen is not yet entirely clear. Imaging and visualization techniques are already inherently a part of robotically-assisted surgeries, such as the 3D endoscopic view provided to surgeons by the da Vinci system, but the incorporation of advanced bioimaging methods into surgical platforms is still at an early stage.

"To my knowledge, clinical studies have not yet demonstrated the utility of many of these techniques during surgical procedures," Sorger told Optics.org. "Narrow band imaging has already been used to help diagnose Barrett's esophagus, a condition associated with esophageal cancer, but is still not accepted as a standard of care. OCT is now being explored to guide biopsies for the condition, although whether or not it is useful is still subject to further studies."

There will be blood
Among the common bioimaging modalities, OCT is perhaps the one already on the firmest footing in clinical scenarios, due to its ubiquity in ophthalmology and use in certain cardiovascular interventions. But even here it may be too soon to expect automatic and seamless integration of the optics technology into robotic surgical procedures. 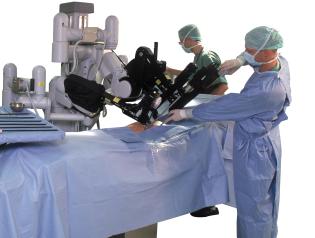 "While the robot makes a nice platform for optics technologies such as OCT, we like to see the clinical utility of the technology demonstrated before attaching it to a surgical robot," noted Sorger. "There are many ways of introducing simple holders for such devices onto robotic tools, and this is currently being done in small trials, but before any true integration we need to see a hint of actual usefulness of the technology, and a desire from surgeons to use it. Clinical utility is being explored, but at present issues with depth penetration and the ability to image through blood remain with OCT."

At Photonics West, Sorger gave two examples illustrating why the finesse and detail provided by bioimaging could be critical, especially in helping a surgeon determine the exact perimeters of a malignancy before cutting.

After a prostatectomy, erectile dysfunction can be a common side effect, with incontinence also a possibility. This occurs because nerves in the vicinity have become damaged during the procedure, so visualizing exactly where to cut and avoiding bundles of nerve fibers in the area is a key step towards minimizing post-surgery problems. But as in many surgical scenarios, the presence of blood causes scattering and interferes with certain imaging modalities.

Blood is also a complicating factor in partial nephrectomy operations on the kidney, by blocking a surgeon's view of the site and making the assessment of the completeness of tumor resection using advanced imaging techniques more problematic. In this case the monitoring of tissue oxygenation is also desired due to the clamping of certain blood vessels during the procedure, which can lead to restricted blood supply and tissue ischemia.

Optical techniques to assess hemodynamics in real-time would be a key assist since, as Sorger noted, surgeons do not like to wait. Intuitive Surgical noticed several urologists using laparoscopic ultrasound probes to image tumor margins for partial nephrectomy procedures, and assisted two ultrasound companies in modifying their devices to make them more compatible with surgical robotic systems.

Further links between optics developers and the clinical community are currently forming, but Sorger commented that from his perspective at Intuitive Surgical "the ties are not as strong as they could be. While we do not think that funding studies to validate others' technology is a good use of our own resources, we are happy to collaborate and to find creative ways to help people gather useful data. Some of the most fun I have is creating a bloody surface and saying 'Here: this is a realistic surgical environment and clinical scenario. Image through this.'"