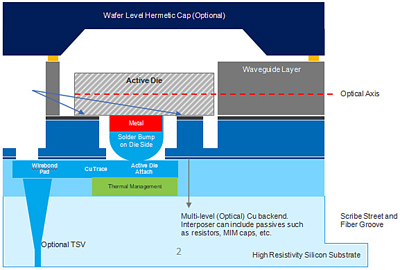 POET Technologies, developer of the POET Optical Interposer and photonic integrated circuits (PICs) for data center and telecommunication markets, has completed and tested its high-speed Directly Modulated Laser (DML) designs. It has achieved this by using a distributed feedback (DFB) structure and successfully “flip-chipped” these lasers onto its Optical Interposer platform.

The company says the flip-chip assembly technique “enables a true single-chip, fully integrated optical engine to be produced at wafer-scale.” This results in what the company calls “the lowest-cost, smallest-size 100G CWDM4 Optical Engine with a form factor of 9 x 6mm, while including banks of four lasers, monitor photodiodes, high speed photodiodes, a multiplexer, demultiplexer, and a self-aligned fiber attach unit.”

Suresh Venkatesan, Chairman and CEO, commented, “Without being able to flip-chip the lasers, we would be unable to assemble optical engines at wafer-scale, which is the single most important driver of cost. Wafer-scale processing enables the production of high unit volumes at low incremental costs, ultimately allowing us to reduce the cost of building photonics devices by up to 40% compared to conventional approaches.

“Following our successful demonstration of this flip-chip assembly process, POET can now readily incorporate these lasers and other active devices into derivative optical engine configurations, supporting data communications applications such as 200G CWDM4, 100G CWDM6, and 100G LR4, telecom applications such as 5G, as well as other applications that could benefit from the small size and low cost of our platform technology.” 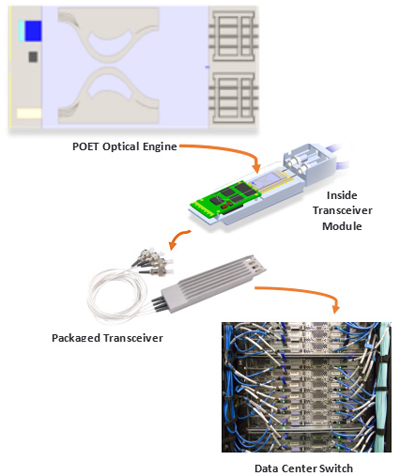 Applications are in in transceivers for data communications. Click for more info.

Operating at speeds of 25 gigabits per second, POET’s family of four DML lasers of different wavelengths are the first known commercial 25G DFB-type DML lasers to utilize a flip-chip process to passively align and bond to electronic and optical circuitry on the interposer platform.

Given the estimated total available market for 100G transceivers of approximately $2.5 billion, POET believes that its recently formed joint venture company, SuperPhotonics Xiamen, can achieve annual revenue of over $100 million within this single market segment in the 2024-25 time frame.

Flip-chip assembly of electronic devices on circuit boards, MEMS and other devices is an advanced manufacturing process for achieving electrical interconnect in semiconductor architectures.

To achieve the benefits of the planar architecture of POET’s Optical Interposer that facilitates wafer-scale processing, the flip-chipping of lasers was an important development milestone, requiring POET to demonstrate that it could simultaneously optimize the radio frequency performance of the flip-chipped DML laser on interposer while preserving a low relative intensity noise measurement both before and after assembly.