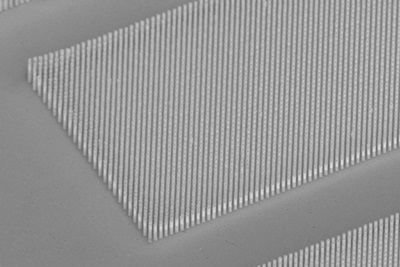 Aledia, the France-based developer of novel and potentially cheaper LEDs, has raised “up to” €28.4 million in a new round of venture finance.

The Grenoble firm’s series B round attracted some blue-chip investors, most notably in the form of IKEA Greentech – the venture wing of the giant furniture store – and the French automotive lighting company Valeo. Both Valeo and IKEA are also said to have signed development and supply contracts.

Aledia’s technology is different to that of existing LED makers in two key ways. One is that it deposits millions of individual light-generating gallium nitride (GaN) “microwires” vertically, instead of carefully growing two-dimensional horizontal layers of GaN that feature in the LEDs manufactured by major players like Osram, Cree and Nichia.

“Each microwire is an LED, capable of emitting light from all sides,” points out Aledia, a 2011 spin-out from CEA Leti, claiming that although both approaches rely on metal-organic chemical vapor deposition (MOCVD), the vertical wire process is much faster.

The second and arguably more significant difference is that the microwires can be grown on a silicon substrate – meaning that Aledia can take advantage of both larger wafers and a fabless business model that exploits a relatively low-cost silicon semiconductor manufacturing infrastructure.

The firm announced more than two years ago that it had made its first LEDs on 8-inch silicon wafers, although it did not publicly detail any technical specifications such as lumen output, white-light efficacy or color temperature - all critical metrics for defining LED chip performance.

Round “abundantly oversubscribed”
Aledia CEO Giorgio Anania, who is also a vice president and part of the executive team of Europe’s influential Photonics21 community group, said: “This financing round, abundantly oversubscribed, and particularly the presence of two very large potential corporate customers, testifies to the interest that our cost-disruptive nanowire LED technology is generating in the customer base, as well as in the financial community.

“We are progressing with the development of the technology and this financing round will allow us to accelerate significantly the speed of development and the customer traction,” added Anania, previously CEO of Bookham Technology for a turbulent period during the 2000s. “In Valeo we have a major potential customer in the automotive LED market, generally viewed as the most profitable market segment. Simultaneously with the investment, we have signed a supply agreement with Valeo.”

In Aledia’s statement, Maurizio Martinelli from Valeo’s “visibility business group” said: "We are convinced that Aledia's 3D LED technology, together with Valeo's expertise in automobile lighting systems, has the potential to put on the market a technological breakthrough in innovative lighting systems.”

IKEA has long championed the adoption of LED lighting technology and has also been a keen adopter of photovoltaics. Christian Ehrenborg, the managing director of its “GreenTech” venture unit, added: “This technology will be one important part in the IKEA Group strategy to supply high-quality, energy-saving lighting products to consumers worldwide.”

Competitive space
While the LED wafer and chip-manufacturing space is already highly competitive, Aledia reckons that its novel approach could cut the cost of devices by as much as 75 per cent compared with conventional designs.

However, cost is not the only factor. Light quality is also critical for many residential and commercial applications, with the Californian company Soraa taking a very different approach to Aledia by growing its device layers on native GaN wafers for high-performance but somewhat higher-cost LED bulbs.

The idea of depositing light-emitting GaN structures on top of silicon wafers and taking advantage of existing high-volume semiconductor production infrastructure is not a new one. But despite years of development activity at big hitters including Osram, Lumileds and Samsung, as well as start-ups like Lattice Power in China and the UK’s Plessey, the approach - complicated by the very different physical characteristics of GaN and silicon crystal lattices – is yet to have a major impact.

Despite that, IKEA’s Ehrenborg sees the potential for closer integration of light-emitting and logic functionality with Aledia’s approach, saying: “The connectivity functions of Aledia’s technology also open up new interesting possibilities to make life at home more convenient and smarter.”

Aside from IKEA and Valeo the series B round included backing from the Ecotechnologies fund of Bpifrance, the French national industrial bank, while existing investors Sofinnova Partners, Braemar Energy Ventures, Demeter Partners and CEAi/ATi also participated.