Lee Feinberg and John Mather cover the past, present and future of the James Webb Space Telescope. 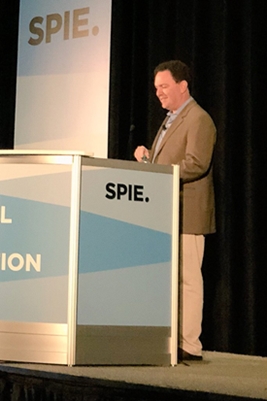 by Mike Hatcher in Austin, Texas
The James Webb Space Telescope (JWST) may not have a definitive launch date just yet, but excitement ahead of its planned lift-off two years from now was palpable in a packed opening plenary session at SPIE’s Astronomical Telescopes and Instrumentation event in Austin, Texas.

Talks by JWST’s optical telescope element (OTE) manager Lee Feinberg and Nobel laureate John Mather set the scene, with Feinberg reflecting on the 15-year development of JWST’s revolutionary optics, and Mather outlining what he expects to be “many decades of beautiful science” following the launch.

Testing times
Feinberg, who previously worked on the corrective optics that fixed the Hubble Space Telescope’s initial vision problem, told delegates that for JWST “technology had enabled the mission” – some of the key elements being the telescope’s lightweight mirrors, innovative wavefront sensing, and precision control.

But he added that the hardest problem faced by the team over those 15 years was testing the giant optical system. That challenge came to a spectacular climax last year. Just as JWST was about to begin critical cryogenic testing in a purpose-built chamber at the Johnson Space Center (JSC) in Houston, word of the tropical storm that became Hurricane Harvey came through.

Feinberg paid special tribute to the 120-strong team of people who managed to complete tests while Houston was deluged, describing a remarkable effort that saw members of that team with pick-up trucks performing shuttle runs to get people to and from JSC, others managing leaks, and some spending nights sleeping on the floor of the space center.

Within a few hours of Harvey hitting Houston, phasing tests on the 18-segment primary mirror had been completed, and Feinberg extended his personal thanks to a team that he said went “beyond what they had signed up for”.

Adding that the 100-day tests of summer 2017 had gone extremely well, Feinberg said he was hopeful that the separate observatory and instrumentation elements of JWST would soon be in one single piece for final tests ahead of the May 2020 launch. 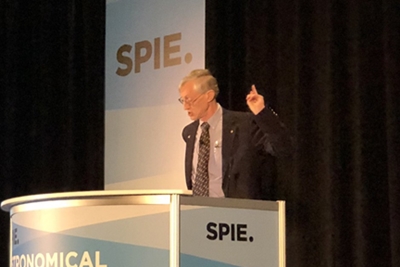 Climbing Everest
Wrapping up his talk, Feinberg likened the JWST engineering effort to the conquering of Everest by Edmund Hillary. Hillary is remembered as the first to do it, and laid out a path to climb Everest, he said, but was also just one part of a 200-person-strong expedition.

“JWST is the first of its kind, and there are lots of lessons learned,” added Feinberg, noting in particular the importance of a “pathfinder” high-fidelity testing stage that went a long way to ensuring that full testing was even possible.

And just as people climb mountains like Everest to admire the view, JWST will provide scientists with unprecedented insights of the entire cosmos. “The ‘view’ for these observatories is the science,” he concluded.

Carrying on neatly from where Feinberg left off was John Mather, whose 2006 physics Nobel was shared with George Smoot for their extraordinary discovery of the cosmic microwave background – the “echo” of the Big Bang.

Like Feinberg, Mather paid tribute to the thousands of engineers and scientists that have contributed to the JWST effort, before embarking on a brief history of the Universe including the observations that it was inherently unstable, has no precise moment of creation, and “probably” no end.

Exoplanet characterization
Once up and running, JWST will enable astronomers and astrophysicists to fill in some key knowledge gaps – largely thanks to its ability to detect well into the infrared spectrum. With detectors capable of capturing light from 0.6 to 28 µm, it has a suite of instruments to probe and analyze not just the most distant red-shifted galaxies, but to see straight through the colossal dust clouds in star-forming nebulae made famous by the Hubble Space Telescope’s imagery, and help characterize relatively nearby exoplanets.

Mather added that JWST would be used to provide rapid follow-up of cataclysmic events detected by the current generation of gravitational-wave observatories. In fact, the gold coatings on JWST’s mirrors that will give it such tremendous infrared sensitivity will also allow it to observe the giant explosions caused by neutron-star collisions - the very phenomenon that is now known to generate the Universe’s supply of gold.

Closer to home, JWST’s instrumentation will be able to search for signs of life in the water geysers now known to exist on Europa, one of Jupiter’s Galilean moons. It may even be able to identify a potential landing spot to send a future spacecraft to make in situ observations.

Perhaps most profound of all, JWST will enable astronomers to answer the question “how common is Earth?” In the Nobel laureate’s own opinion, the answer is that “Earth is unlikely to be common”.

And having noted the sheer serendipity that has seen life emerge and evolve on Earth, Mather returned to that theme as he closed his talk. “Wish us luck with the launch,” he concluded.